Preview of the Perennial Maman label
for The Wine and Cheese Place!! 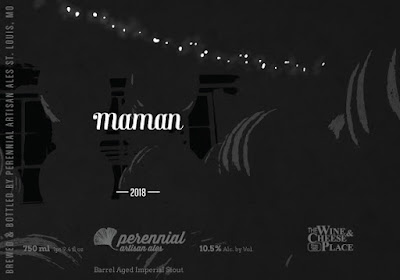 Update:  As you know, the brewers are very busy.  They have not had a chance to bottle Maman yet due to releases of other beers.  They are hoping to bottle soon whenever time allows.  We will update as soon as we know.   It is coming, be patient!  I will keep passing on any news they send my way.

We are very excited about this one and very thankful to Perennial for making this beer for The Wine and Cheese Place!
Perennial Barrel Aged Maman Imperial Stout - TWCP Edition
10.5% Barrel Aged Imperial Stout
- Going to be a two barrel blend (Four Roses and Wild Turkey) that has been aging for an amazing 28 months!
"They took awhile to come around (28 months!), but I think you’ll agree it was worth the wait." - Phil Wymore, owner and headbrewer of Perennial.
This will go through the BRC - at least partially based on Perennial support. 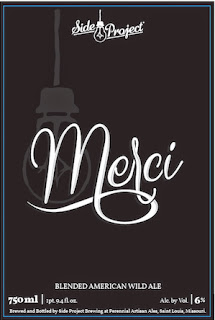 Exciting news!
Thank you so much to Cory and Karen King!

Blending Session with Cory King at Side Project!!

Amazing chance to taste Side Project beers from the BARREL and help to decide the next Merci blend!  Really a very special treat!   We are honored to be able to get this beer and help do the blend under the guidance of Cory.   We did this last year and it was a great experience.

We have a date:  June 13 at 6pm.
Cory has graciously allowed us to bring 10 of our customers with us to taste from barrel at Side Project.

So the top 10 BRC customers (no guest) based on beer purchases will be invited to the event.  If they cannot attend, we will go down the list until we have 10 people.
It will be based from January 1, 2018  through probably about mid May19th.  Emails will go out starting May 20th or 21st.

The biggest beer news of the year!
Thanks to Cory, Karen and family at Side Project!

Update - D8 - we have a solid release date now!
May 21st. I will send out BRC emails either Sunday May 20th or early morning on the 21st!!

No matter which method we use, people will get upset. We only have 48 bottles - and 1000s wanting them. We try to be fair and support those that support the store. If the report was printed today, basically if you spent $13 per week for the last 6 months you are eligible for a chance to get a bottle. That translates into a 6pk or 2 per week or even just 1 bottle of a nice 750ml beer per week. So for people that make the special trip to our store instead of the convenience of the grocery store, they get rewarded. I feel this is better than just letting people race to our store that have not shopped at our store or only shop our store for the rare ones (and buy all their everyday beer at the grocery store).

It will be super limited - we are getting about 48 bottles only.
This one will go based on beer support from the last 6 months before the release date.

Here is the plan -


Side Project D8
Derivation is our series of Barrel-Aged Imperial Stouts in which we brew several recipes, age them in a variety of barrels and blend them before bottling to add depth and structure to this massive style of beer.

Blend #8 is a select blend of barrel-aged stouts that were aged for 1 to 3 years before being blended and infused with coffee, coconut and vanilla.
Posted by Paul Hayden at 12:07 PM