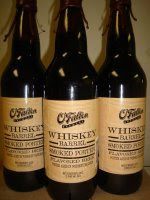 A big congratulations to everybody
at O'Fallon Brewery right here in Missouri.

O'Fallon Whiskey Barrel Smoked Porter was named one of the top 25 beers in the world in 2008. It is great to see them get some recognition from a national magazine. It is amazing how many great beers there are in the world and O'Fallon made the top 25. Well done!! Unfortunately, the winning edition (Buffalo Trace) has been sold out for awhile. I have only 1 bottle left the the Weller Edition at Forsyth and maybe some at Provisions Gourmet Market. I also heard that there is some O'Fallon Cocoa Cream currently in barrel waiting for release.

"These are the beers that, in the last year, have made us stop, think and beg for more. Some are old, some are new, but every one is worth the hunt and deserves a place on a pedestal (or in your fridge). -- Draft Magazine

Check out some of the other names on the list top 25 beers of 2008. Others on the list include
Three Floyds Dark Lord
Bell's Hopslam
Deschutes The Abyss
Struise Pannepot
Lost Abbey Angel's Share
Westmalle Tripel
Russian River Pliny the Elder
Dark Horse Reserve Black Bier
Dogfish Head Palo Santo Marron
New Holland Dragon's Milk
Odell Woodcut #1
Surly Darkness
.......this is almost a who's who in the brewing business.


O'Fallon Whiskey Barrel Smoked Porter (Buffalo Trace Edition)
"Robust Porter: This Missouri brewery made a name for itself with beers like Wheach (due out soon), but this smoked beer is something extra special. O'Fallon's brewers obtained remarkable results when they took their GABF-gold-winning smoked porter and aged it in Buffalo Trace whiskey barrels.
Tasting notes: While the whiskey imparts a strong sweetness to the brew, it doesn't take away from the smoky, chocolaty complexity of the malts, achieving a rare balance of barrel aged beers."
-- Draft Magazine

** From the top 25 we have in stock the following
Struise Pannepot (Ratebeer.com's #1 Brewer of 2007)
"For five years, de Struise has rented space at Belgium's Deca Brewery to brew its beer. In that time, de Struise has become recognized as one of the world's premier breweries, and in the last two years, we've been fortunate to get this beer on our side of the pond. This Belgian treat is perfectly balanced, with bold flavors that never overwhelm the palate.
Tasting notes: Pannepot starts with a deep toffee sweetness marked by fruity fermentatation notes. It has an incredible body that is full but not heavy. The deep toffee sweetness and plum fruit notes move like a slow dance, deliberate and sensual, and the finish is a crescendo of taste and balance." -- Draft Magazine - read more
Harviestoun Ola Dubh 16 yr
Westmalle Tripel
New Holland Dragon's Milk RIS -- Due in February