but check out these EXTREMELY rare gems...only at our Forsyth location.
(Call first, we only have 1 bottle of each left on hand) 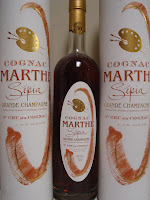 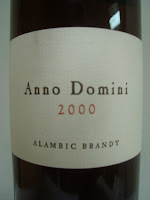 -- sold out
The Spirit Shop...$599.99
67 Wine and Spirits...$420.00
Bottle #297 of only 1200 produced.
"When we released the Anno Domini 2000 in 1999, we dumbfounded the reviewers. The brandy was universally received as one of the finest spirit ever produced, equal or superior to the best cognacs. Anno Domini is a limited annual release, just over one barrel, blended from our finest aged brandies. The components were produced from wines of a quality never before used for distillation: world-class Pinot Noirs, with a touch of old-vine Palomino, the grape of sherry. Rigorously selected for extended aging, the brandy is brought to full maturity in air-dried Limousin oak.
Hubert Germain-Robin's family produced cognac for two centuries. He uses patient, time-honored methods that have almost entirely disappeared in France. Due to its origin in exceptional wine, the Anno Domini is extraordinarily rich in flavor, yet remains subtle and delicate, passing like silk over the palate. Hand-numbered bottles." -- Germain Robin
One of the "Five Cognacs of the Century" Richard Carleton Hacker
"A miraculously dense and complex brandy made mostly from pinot noir...superior to Paradis…equal to the best very old single-vintage, small producer cognacs" -- New York Times 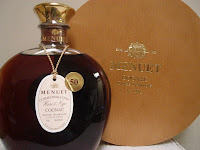 The Whiskey Exchange...$469.56
This has to be one of the best Cognacs I have ever tasted.
50yr Single Vineyard Collection
1er Cru de Cognac
"Best Spirits of 2002" - Cognac -- 1st Place Menuet "50"
"Menuet Hors d'Age Grande Champagne Cognac 50 Years Old A very old, very rich Grande Champagne Cognac that will reward the patient connoisseur as this requires full aeration to fully enjoy the deep layers of flavor- the importer recommends at least thirty seconds of "air time" for each year of maturation." - Beverage Tasting Institute 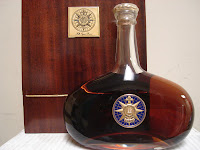 ShopRite Liquors...$952.27
GetWines.com...$1299.99
Kelt Tour du Monde Petra is from 1990 shipment which left Cognac on 7/6/1990 and returned on 11/9/1990
Bottle # 673
During its voyage it visited many ports of call...Antwerp, Rotterdam, Hamburg, Colombo, Malaysia, Singapore, Hong Kong, Taiwan, Korea, Osaka, Tokyo, Los Angeles, Charleston, Baltimore, and New York and a few more before returning to Cognac.
"Kelt Petra is International Beverage Company’s marquee grade cognac. Kelt Petra is also 100% Grande Champagne. The weighted average age is 70 years, comprised of casks aged between 15 and 135 years. The bottle is a crystalline, lead-free decanter with a cork stopper to ensure that the cognac is kept airtight. Kelt Petra is an original concept: Petra rests in a beautiful, mahogany, hand-built cabinet, which is great as a back bar display and for tableside presentation. Instead of having the Tour du Monde certificate on the bottle, a blue “checkbook” is provided. The checkbook is a unique item. Each bottle is numbered to the blue checkbook. Inside there are 18 pages for the restaurant’s guests to sign their name and addresses. When the bottle is empty, we ask the account to mail the checkbook to IBC’s office in Atlanta, Georgia. In return, Olev Kelt mails out letters thanking your guest for participating in Kelt Petra’s Tour du Monde experience, recaps the Tour du Monde story and invites them to visit Olev Kelt’s chateau for lunch if they visit France. The blue checkbook is mailed back to the account so they have a record of who their fine eau de vie consumers are. Kelt Petra received a 97/100 (the highest-rated marque grade cognac) and Platinum medal by the 1995 Wine Enthusiast Magazine World Spirit Championships." -- International Beverage Company
read more about Kelt 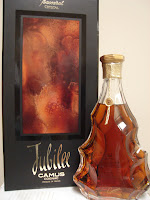 -- sold out
WinexWine....$719.99
Whiskey Exchange...$911.73
A gorgeous Baccarat Crystal bottle.
"The Camus Jubilee Elegance Cognac blend was created in the early part of the 19th century to mark the Camus House's 50th Anniversary. Camus Jubilee Elegance Cognac is a mature symphony of fine leather, cigar box and a hint of smokiness on the nose, with a majestically persistent fusion of creamy oak, honey and spice on the palate.

Presented in a strikingly, unusual decanter sculpted from the finest Baccarat crystal. Camus Jubilee Elegance is the ultimate expression of a family marrying ancestral values and innovation for almost 150 years.

Camus is the largest independent and family-owned Cognac house, managed by 5 generations of the same French family since its foundation in 1863." -- Camus 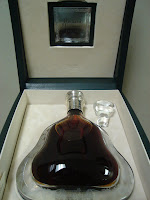