Back story:
It is well known that four cups of wine are drunk on the first night of Passover. But little is understood about the fifth cup. In the vast expanse of the Babylonian Talmud, the fifth cup is mentioned just once, giving credence to the assumption by some that it must have been an error. In most printed versions of the Talmud today the ‘fifth cup’ has been removed.

Throughout history though, many Torah luminaries have argued that the ‘fifth cup’ text should remain. In the 16th century, the famous Maharal of Prague urged that the unabridged version of the text be followed: “…over the fourth cup one completes the Hallel. Over the fifth cup one recites the psalm known as the Great Hallel.”

He writes that Hallel (Psalms 113-118) and the four cups of wine at the Seder are related to redemption. The Great Hallel (Psalm 136), however, is one step above redemption and associates with the number five, for it states that the Lord provides every single creature with food. The Talmud aptly expounds that providing “the sustenance of an individual is even more difficult than redemption.”

As such, the fifth cup has its rightful place at the Passover seder. It serves as a testament to the Almighty who not only redeems, but also provides sustenance directly and not through an intermediary. The Fifth Cup™ liqueur was developed to acknowledge this wonder.

Our cup sits inside a five petaled rose depicting the description in the opening lines of the Zohar. “And there are five strong petals on which the rose is set and they are called salvations and now they are known as the five gates. And this rose is called the cup of blessing, of which it is said, ‘I will take up the cup of salvation…’ ” (Psalm 116:13).

The Fifth Cup™ liqueur is hand-crafted with the finest figs, apricots, dates, almonds and pistachios to create a taste reminiscent of renewal and springtime. It is meant to be enjoyed during Passover and the rest of the year as gratitude to the Almighty, who sustains us each day. 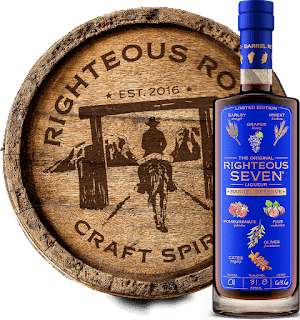 Righteous Seven Barrel Aged...$32.99 / 375ml
Are you ready to try the American fruit liqueur that was the category winner at the 2020 San Francisco World Spirits Competition?
At Righteous Road®, we have taken our award-winning Original Righteous Seven® liqueur and rested a special Reserve edition in new American white oak whiskey barrels.
The result marries an exceptionally nuanced fruit liqueur with rich flavors of forest fruits and chocolate to the signature barrel notes of vanilla, toffee, and toasted almond that come from charred Kentucky oak.
Savor this Barrel Reserve limited edition straight up and treat yourself to something truly special.
Each bottle is single barrel filled at cask strength.
Posted by Paul Hayden at 6:40 AM