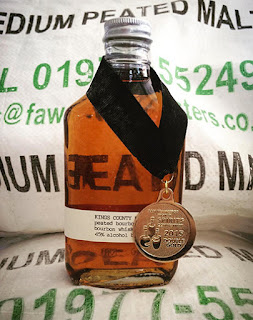 Kings County Peated Bourbon Whiskey...$57.99 / 750ml
PEATED BOURBON
What is Peated Bourbon? It’s bourbon whiskey that conforms to the American requirements for bourbon but is made with malted barley that has been exposed to peat smoke, a practice more common in Scotch whiskies—the malt we use for the peated bourbon was even grown and kilned in Scotland. So it’s a hybrid whiskey of the two traditions, flavorful and robust from having aged in a new barrel, with an added light smoky finish reminiscent of single-malt. If scotch and bourbon had a baby, this is what it would taste like. As far as we can tell, ours was the world’s first ever peated bourbon and will appeal to the adventurous whiskey traveler who has tried everything.
“The dram is salt-forward from start to finish, interspersed with rich bursts of flavor. Hot rubber, pretzels, slightly bitter baker’s chocolate, warm leather, and hard candies define the palate…peat is not a primary element, but it is clear that this is an exceptionally complex spirit.”—Whiskey Wash (93) “Quite stunningly lovely.” (94=Superstar whiskies that all give us a reason to live) Jim Murray’s Whiskey Bible, 2017


Kings County Single Malt Whiskey...$57.99 / 750ml
Peated Malt
Our Single Malt Whiskey is made almost entirely like a single malt scotch—except that instead of being made in Scotland, it’s made here in Brooklyn. Kings County Distillery’s single malt whiskey is open-fermented off the grain from malted barley (with a hint of peat) sourced from England and Scotland. The whiskey is twice distilled in traditional Scottish pot stills, then aged in our own used bourbon barrels anywhere from 1.5 to 4 years. With a higher post-cask strength than our American-style offerings, this whiskey warranted a higher bottling strength—47%—and so it is more potent than its palate would suggest. Dry and sophisticated, it is an elegant whiskey with notes of honey, hay, burnt orange peel, and peat. It is a perfect addition to your shelves.