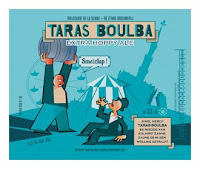 Just arrived...
Taras Boulba....$10.99 / 25oz.
"Wow. This is quickly becoming one of our favorite beers here at Shelton Bros. This is the perfect session beer -- loaded with complex yeast flavors, hopped to perfection, and as drinkable as any beer you've ever tried. At 4.5% alcohol, it's built for drinkability -- we suggest buying it by the case.
You're no doubt wondering where the name comes from and what the hell the foreign text says. It's all been explained to us by the brewers, but we're still not entirely clear about it. What we can understand is that a young Flemish man has gone and married a French-speaking Wallonian girl, and his father, Taras Boulba, is very angry. (Smeirlap means 'fool' in a bizarre local dialect, which combines Flemish and French, somehow.)
This is all a bastardization of the original story by Gogol, whose protagonist was Russian, a Protestant. His son marries a Polish girl, a Catholic, during the religious war between the two countries in the 1600's, and the Russian father simply kills his son to eliminate the shame.
The label says this is 'just the beginning of the story,' so surely the brewers have something else up their sleeves. We can't wait.
Can you just trust me on this one? This beer rocks. Hard." - importer 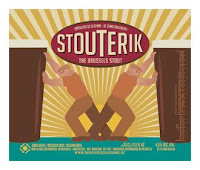 "Interestingly, in Belgium, bold now means a return to the way things used to be, before over-sugaring, over-spicing, and under-hopping became de rigueur. Stouterik is a classic Belgian Stout, in that sense -- it's only 4.5%, contains no spices, won't make your tongue stick to the roof of your mouth, but we defy anyone to just drink one. Roasted malts and unmalted roasted barley give layers of dark bitter, choclatey flavors, and like all De La Seene beers, this one is hopped to the max for drinkability." -- importer
Posted by Paul Hayden at 6:36 PM