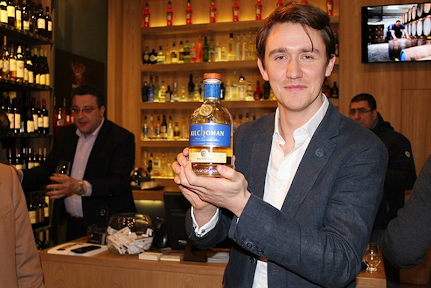 SPECIAL OPEN HOUSE SCOTCH TASTING
WITH JAMES WILLS OF THE KILCHOMAN DISTILLERY
This Thursday, August 25th from 4:00 to 5:30pm
At our Clayton Location 7435 Forsyth Blvd.

Tasting. KIchoman is a true farm distillery. They grow their own barley, malt it themselves, distill and bottle right on their farm. Founded in 2005, Kilchoman was the first new distillery to be built on Islay in over 124 years. Anthony Wills, Kilchoman Founder, set out to resurrect the grass roots tradition of farm distilling

Here is what James will be pouring.


James Wills, son of Kilchoman Founder Anthony Wills has been involved in the distillery from its infancy and claims to have done every single job in the distillery since in establishment in 2005 - from polishing the stills when they first arrived to bottling the first malt by hand (with tea pot!), James knows the distillery’s every nook and cranny.

Having worked in the drinks industry in London for four years after university James returned fulltime to the family business in January 2020. He, his father and brother now form the Kilchoman Sales and Marketing team with James concentrating particularly on the US market where Kilchoman has grown enormously in popularity since its first launch in 2010 and is quickly developing a cult status with Scotch whisky drinkers.
Posted by Paul Hayden at 1:56 PM