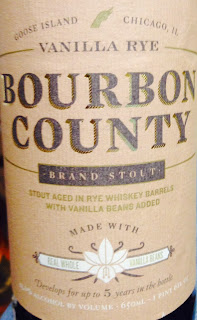 Goose Island Vanilla Rye -
Getting a lot of phone calls - Yes it did arrive, emails went out to BRC yesterday.

We got very little - sorry.
Posted by Paul Hayden at 12:18 PM No comments: 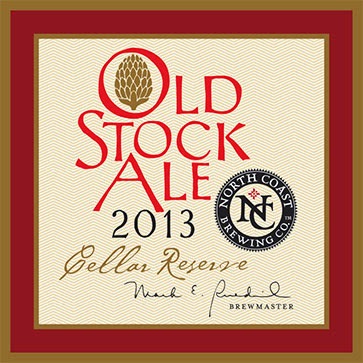 North Coast Brewing Old Stock Ale 2013...$22.99 / 500ml
Aged in Bourbon Barrels
Old Stock Cellar Reserve is a small batch, limited release that has been aged in bourbon barrels. The aging process gives this world-class beer added layers of complexity and flavor. Bottled in a 500 ml bottle with a cork and wire finish, it is a memorable drink that should be enjoyed as a unique offering.
VITAL STATISTICS
ABV 14.1%
Recommended serving temperature 60° 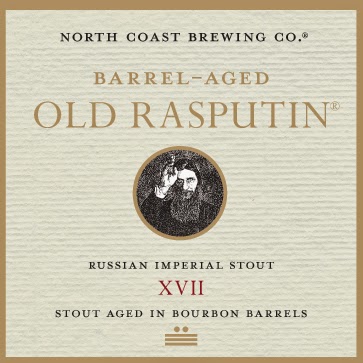 North Coast Barrel Aged Rasputin XVII...$19.99 / 500ml
Every year we age a special batch of our much-loved Russian Imperial Stout in Bourbon barrels. The depth, intensity, and complexity of the flavor profile of this special release, like its predecessors, make it a worthy tribute to Old Rasputin.

Prior to 2010, Barrel-Aged Old Rasputin was released in such limited quantities that it was available only at the North Coast Brewing retail shop in Fort Bragg, California. However, we received so many requests for this beer that we began producing enough Barrel-Aged Old Rasputin to put into broader, but still limited, distribution.
VITAL STATISTICS

Santa Fe Brewing Aged Sour State Pen Porter...$12.99 / 22oz
Two Year Barrel Aged Beer
The Los Innovadores team has decided to take you back in time, H.G. Well’s style. We invite you to kick it ‘old school’ with a beer that’s style came right out of the 19th century. Prior to the industrial revolution this “Sour” or Brettanomyces fermented porter was a fairly common public house delicacy! In order to recognize this quirky beer style we must never forget ‘The Power of Darkness’ in our attempts to drink to ‘War and Peace’ with a truly pre-prohibition style ale. Zip up that bustle, telegraph the neighbor for a visit, be careful when you hop into your horse and buggies. It’s time to get out the Beethoven and share this beer over a rousing game of snakes and ladders!
Posted by Paul Hayden at 5:07 PM No comments: 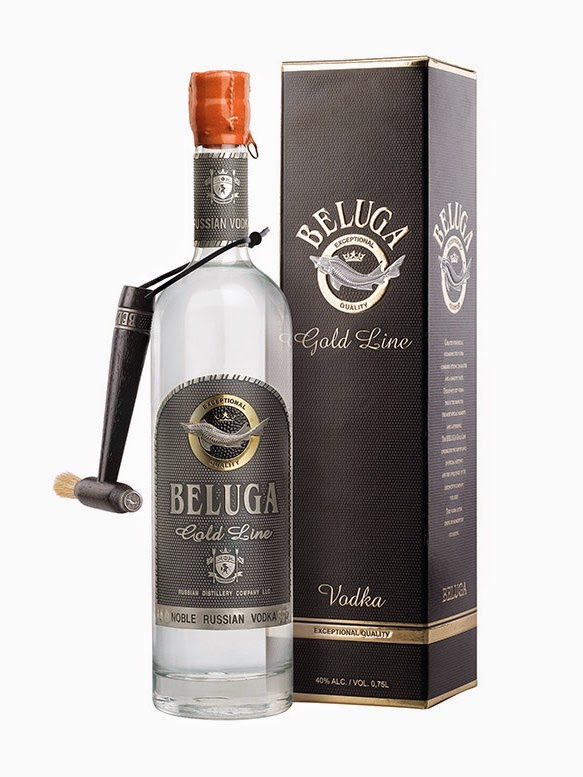 Beluga Gold Line Vodka...$109.99
Beluga Gold Line is a limited edition product.  Needless to say, it is dedicated to the true connoisseurs of strong spirits.  Unlike other Beluga varieties, in this series our trademark blend of artesian water and malt spirits passes through not three but five rounds of filtering.  Each bottle comes with its own serial number and a cork stopped with sealing wax.  To clean out the sealing wax, each bottle of Beluga Gold line comes with an elegant hammer and brush, emphasizing 100% authenticity and individuality of this limited series vodka an imposing attitude.
Posted by Paul Hayden at 2:37 PM No comments: 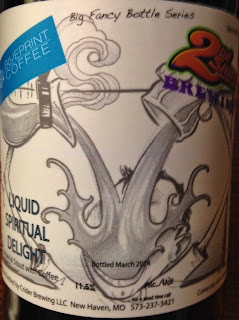 Limit 2 per person
2nd Shift LSD with Blueprint Coffee...$14.99 / 750ml
Son of a...Blueprint did it again with the coffee.  So this time we used Karimikui which comes from the Chelekeletu Coffee Beans.  We bottles 45 cases this go around, you lucky pig knuckle." - label

CHELELEKTU ("CHELE")
Chelelektu is a town located in the Gedeo Zone of Yirgacheffe. We’re calling it “Chele” for short (rhymes with Shelly). A majority of coffee from Ethiopia is processed using the natural (or dry) method, however, Yirgacheffe is better known for its washed processing. Over the past five years, the demand for natural-processed coffees from Ethiopia has increased, leading many cooperatives and collection stations in Yirgacheffe to begin offering natural-processed coffees. This natural-processed selection is incredibly clean and offers some of the floral notes found in many washed coffees from Ethiopia while maintaining the syrupy and sweet profile of the natural process. If you were a fan of our Aramo offering last year, this should be a coffee you’ll love.
Posted by Paul Hayden at 10:52 AM No comments: 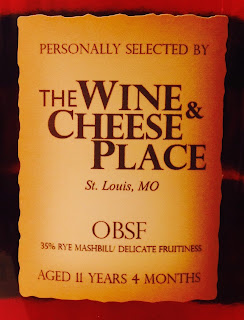 We bought our 2nd barrel of Four Roses at BARREL STRENGTH.
Just a few bottles left of the first barrel.
This is the only way you can get this rare barrel strength Bourbon.  We have 150 bottles of this wonderful Bourbon.  It is aged a little longer than our first barrel.  (this one is over 11 years old).  This one also has a "High Rye" mash bill. 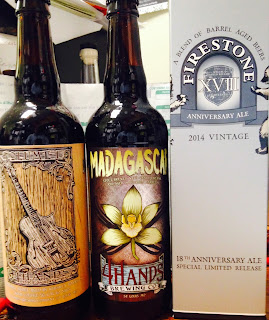 Firestone Walker Anniversary Ale XVIII...$20.99 / 22ozThe Vision Behind Our Barrel Aging and Blending Program Is Still the Same!
The Goal: To create complexity centering on oak, in a multitude of forms, by brewing high gravity beers in complementary styles, aging them in different barrel formats and then blending them together to achieve harmonious new flavors.

The Puzzle: To blend these various components to create a synergistic whole that is greater than the sum of its parts. This is done with the help of a few of our neighboring Paso Robles winemakers who are practicing experts in the art of blending.

The Inspiration: Firestone Walker’s oak brewing tradition and our connection with winemaking. Of course until the advent of stainless steel, brewing was intimately linked to wood barrels and vessels. Brewing has a deeply rooted history in the alchemy of blending.

The Barrels
The individual lots were aged in oak barrels, many of which were hand selected from premium Kentucky spirits producers by Tom Griffin, who is extremely passionate and knowledgeable about bourbon barrels and beer. Each barrel lends its own unique influence to the final blend.

A Note from Brewmaster Matt Brynildson
Our 18th Year!
As the 2014 brewing year got rolling, it became apparent that we were in for an exciting ride. What was once a brewery focused on brewing wood-fermented English ales and American dry hopped beer, evolved to also produce a hoppy Pilsner, a Belgian Saison, as well as a host of barrel aged wild ales! Yes, we added Opal to the lineup this year and with this beer came new Belgian yeast, which deserves equal attention and equal accommodations as our other yeasts. To make this happen and to juggle the four yeast strains we currently brew with (we still make Bavarian Hefeweizen for our Taprooms) we added a new Yeast Spa and Rejuvenation Center to the cellar. Our newly appointed yeast wrangler Sam Tierney has been put in charge of the lavish yeast resort. Each week he carefully propagates, harvests, chills, mixes, and pitches our fermenting friends, keeping them happy and refreshed – promoting the magic that only yeast can make. On the other side of the brewery we added a number of new fermenting and lagering vats, designed to be perfect for both dry hopping Union Jack as well as lagering Pivo to perfection. As this work was going on, we upgraded our keg-racking program, adding the highest quality and most thorough keg washer and gentle keg filling equipment available, housed in what we affectionately call the “Keg Shed.” As if this wasn’t enough for Will Crosby and the packaging crew to handle on the improvement front, we added a cannery to the brewery! We now offer our beers in bottles, kegs and cans. This will allow our fans to carry FW brews to the beach, on the trails, to the golf course or wherever a tasty brew is called for. A lot of thought and effort was taken to ensure that our new can line will perform as well as our faithful bottle line. Of course while this was all going on, the rest of the brew team was busy milling grains, lautering wort, cleaning tanks, propagating yeast, dry hopping fermenters, bottling, racking and shipping (not to mention constant maintenance, lab work and sensory analysis). Easy Jack, our new session IPA, was born with great success along with a host of new wild and sour beers created by our Barrelworks crew. It was truly an amazing year of brewing, improvement and creation!

The Winemakers and Friends
On the beer you are about to enjoy; this project is all about creating flavors through blending and no one knows blending better than a winemaker. As brewers in this project, we create individual beers that we believe will lend something to the blend. We add a brew or two each year to see how the winemakers react, hoping to add another splash of flavor for the final blend. Some brews are added due to brewing collaborations that we engaged in, as in the case of Ol’ Leghorn, brewed with Three Floyds, and Hydra Cuveè brewed with Flying Dog. With all of this, our hardest work is done months before the final Anniversary beer is realized. In the end, we step aside and allow our brothers and sisters in fermentation science to take over and formulate the blend. It is an amazingly educational experience. I continue to learn so much from watching and listening to them in these blending sessions. Crush (the wine grape harvest) came early this year and we were honored that these busy enologists took time away from the harvest to join us in creating this beer. I can’t help but think that being in the middle of their most intense time of year only adds to these sessions with their heightened senses being in the creative zone in the midst of crush. Many of the folks who have helped us in the past returned to lend their well-tuned senses to this project. This year’s blenders included: Matt Trevisan – Linne Calodo, Steve Martell – Kaleidos, Eric Jensen – Booker, Justin Smith – Saxum, Brock Waterman – Brochelle, Kevin Sass and Molly Lonborg – Halter Ranch, Sherman Thacher – Thacher Winery,Russell From and Philip Muzzy – Herman Story, Mark Adams – Ledge and One Time Space Man, Terry Hoage – Hoage Cellars, Chelsea Franchi and Neil Collins from - Tablas Creek and Lone Madrone. If you are into artisanal barrel aged products, then you need to check out this amazing group’s work. Also joining us was Arie Litman and his amazing homemade bread and Bobby Fox of Western Square Industries. It was a great group who worked in teams to create a number of different potential blends. We then had the winemakers taste through them blindly and vote to select this year’s awesome blend. When the dust settled, it was the blend created by Russell and Philip of Herman Story that is in this bottle. A lot has happened since that first “10” blending session and each year the experience gets better.

The Finished Piece
As a finished beer, XVIII is a dark and complex brew full of malt and barrel derived flavors, with Parabola leading the brew into the rich darkness. The beer is unfiltered and unfined, so there will be a small amount of sediment in the bottom of the bottle. XVIII is best enjoyed poured carefully into a half filled brandy snifter or wine glass. Allow it to warm to 55F to fully enjoy the pleasing and complex aromas. As the beer sits and breathes in the glass, rich dark chocolate, toasted oak and dark fruit character is revealed, so take your time. If you wait to open your bottle later, store it in a cool dark place. I suspect that this beer will age well and change favorably for years to come. It was an absolute pleasure in the making and I truly hope you enjoy our ninth oak-aged blend! The journey continues and it’s just as fun and exciting now as it was back in 1996.

This beer is dedicated to Jake and the rest of the amazing Wolfe family who have supported this community, our brewery and me personally since the beginning. We love you dearly.