"The Cabernet and Shiraz blends begin with the 2006 Shiraz (70%) – Cabernet Sauvignon (22%) “Koonunga Hill”. Purple-colored, the wine offers meaty black currant, blackberry, and blueberry aromas. On the palate the wine exhibits remarkable focus and structure for its humble price. The fruit is grapy and primary as well as intensely flavored. It should evolve for several years and drink well through 2022 if not longer. It is a fantastic value."
---Rated 91/100 The Wine Advocate

WOW-- what an amazing bargain!
Stock up on this wine!!!
Posted by Paul Hayden at 8:37 AM No comments:

Achel Trappist Ales
There are only 7 breweries allowed to carry the Trappist logo...

These criteria must be followed:
**The beer must be brewed within the walls of a Trappist abbey, by or under control of Trappist monks.
**The brewery, the choices of brewing, and the commercial orientations must obviously depend on the monastic community.
**The economic purpose of the brewery must be directed toward assistance and not toward financial profit.
This association has a legal standing, and its logo gives to the consumer some information and guarantees about the produce.
(criteria from Wikipedia.com)
There are currently seven breweries that are allowed to have their products wear the Authentic Trappist Product logo:
Bières de Chimay
Brasserie d'Orval
Brasserie de Rochefort
Brouwerij Westmalle
Brouwerij de Achelse Kluis
Brouwerij de Koningshoeven
Brouwerij Westvleteren -- only available at the Brewery
(you can order it online at www.belgianshop.com, $$$)

We now have 6 of the 7 in stock.
Just Arrived!!
The smallest of the 7 breweries.
Brouwerij de Achelse Kluis

Achel 8° Blonde...$5.49 / 11oz
"A pale, strong, fruity, hoppy Trappist ale from Belgium's newest Abbey brewery. Achel 8° is hard to find even in Belgium; in the U.S. it will be the rarest of beers.
This blond, flavorful beer is a surprisingly refreshing brew at 8% alcohol by volume. It is lightly filtered, but still wholesomely hazy with yeast remaining in the bottle. For the moment, it shares the same label with the Achel Bruin beer, but can be differentiated by the cap – the Blonde has a white cap and the Bruin a gold cap."--importer

Achel Bruin...$$5.49 / 11oz
"This dark amber, flavorful beer is surprisingly refreshing at 8% alcohol by volume. It is lightly filtered, but 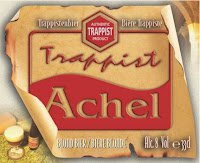 still wholesomely hazy with yeast remaining in the bottle. The Monastery is designing new labels for this beer, but for the moment is can be differentiated from the lighter Achel 8º only by the bottle cap – the blonde has a white cap and the bruin has a gold cap. Both beers are fantastic, however, so don’t worry if you didn’t get what you expected.
Selected as one of the top 50 beers in the world by Men's Journal Magazinie, July 2005." - importer

check out their website
http://www.achelsekluis.org/
Posted by Paul Hayden at 1:00 PM No comments:

“One of the 20 most influential wine personalities of the past 20 years.”
-- Robert Parker, The Wine Advocate

We are getting ready to place an order for Robert Kacher wines.
Here is an offering on some of his Burgundies.
All wines are listed at net Case Prices.

Notice that some cases are 6 bottles.
Orders must be full cases only.
This is just an offering, we will have to confirm availability with the importer.
Orders due by Monday June 15, 2009
To place an order call 314-727-8788 or
email: paul@wineandcheeseplace.com

Domaine Bertrand Ambroise
"The domaine of Bertrand Ambroise was established in the late 18th century in the village of Primeaux-Prissey, just north of Nuits Saint-Georges. Today the estate has expanded to 42 acres which are worked diligently by Bertrand and his family. Bertrand produces some of the finest examples of Pinot Noir and Chardonnay in Burgundy. He often works with 10%-30% lower yields than are allowed. His genuine passion only to produce wines from absolutely ripe grapes demands a severe green harvest and an additional inspection or sorting of the fruit prior to fermentation. All of this detail work has created a worldwide demand for his wines. The style of Bertrand’s wines can be characterized as ripe, deeply extracted, full bodied wines. This Bourgogne bottling is vinified in stainless steel and shows crisp apple, pear flavors as well as classic mineral tones." -- Robert Kacher Selections
Case Price
$260 ---- 2006 Bourgone Blanc
$304 ---- 2007 Hautes Cotes Nuits Blanc
$374 ---- 2006 Ambroise St. Romain Blanc
$210 ---- 2007 Bourgogne Rouge
$326 ---- 2007 Cotes Nuits Villages
$426 ---- 2004 Nuits Saint Georges
$1000 -- 2006 Nuits Saint Georges 1er Cru Rue Chaux
$1000 -- 2006 Nuits Saint Georges 1er Cru Vaucrains
$1000 -- 2006 Nuits Saint Georges 1er Cru Argilliere
$1455 -- 2006 Corton Rognets Grand Cru (93 WS)
$1750 -- 2006 Echezaux Grand Cru
Domaine Chauvenet-Chopin
"We first began working with the family Chopin in the 1987 vintage, with Daniel Chopin of Domaine Chopin-Groffier in Comblanchien. Daniel’s daughter soon married vigneron Hubert Chauvenet, forming the Domaine Chauvenet-Chopin. The two families combined their vineyard holdings, many of them planted with very old vines, with eight hectares from the Chopin side adding to the nine already owned by Chauvenet. Daniel continued to work along side and help his son-in-law until 1996, when he officially “retired”. Daniel is still helping out in the vineyards, but Hubert is now solely responsible for the winemaking. Continuing in the style of his father-in-law, Hubert is crafting classic wines with fine delicacy of fruit and rich complexity. The barrel regiment Hubert uses includes a little more new oak than before, but not too much. Roughly one-third new barrels are used for the Village and Premier Crus, and up to two-thirds for the Grand Cru. Always supple, opulent, seductive, and fruit-driven, the offerings from Chauvenet-Chopin are friendly, smile-inducing wines." -- Robert Kacher Selections
Case Price
$255 ---- 2006 Bourgogne Rouge
$330 ---- 2007 Cotes Nuits Villages
$440 ---- 2004 Nuits Saint Georges
$477 ---- 2004 Chambolle Musigny
$870 ---- 2006 Nuits Saint Georges 1er Cru Thorey
Domaine Christophe Cordier
"Christophe Cordier is one of the hottest winemakers in Burgundy. The domaine is located in Fuissé and is renowned for making first class wines from fruit grown in only the best terroirs or sites. Christophe believes the work begins with low yields, hand harvesting only physiologically ripe fruit and intervening as little as possible. Harvest usually starts at the end of September and lasts through the middle of October. All of the wines made here are fermented in wood which allows for the sublime flavor integration. The wines found here all express intense and focused aromatics while concentrated, impeccably balanced rich, long flavors take over in the mouth. The wines from Pouilly Fuissé are often thought to rival and surpass many of the top level wines found in the Côte de Beaune and at a fraction of the price." -- Robert Kacher Selections
Case Price
$300 ---- 2006 Macon Blanc Bois d'Allier
$355 ---- 2005 Pouilly Fuisse
$420 ---- 2006 Pouilly Fuisse
$375 ---- 2006 St. Veran Vieilles Vignes
Domaine Jayer-Gilles
"Domaine Jayer-Gilles is run by the very talented Gilles Jayer who took over for his father Robert Jayer in 1998. The estate is collected around the world and very scarce. The total allocation for the United States of this wine is around 350 cases. Gilles take the same care for his Aligoté as he does for his more famous appellations. Most growers’ yields for Aligoté are around 3 tons per acre while Gilles prunes so severely that he never harvests more than 2.2 tons per acre. The astounding quality of this wine is proof of the commitment to quality of the entire estate. This wine expresses the full potential of the grape with well defined mineral and spicy orchard fruit and touches of creamy oak. The wine is bright and fresh and can be enjoyed with all foods the pair well with Chardonnay." -- Robert Kacher Selections
Case Price
$200 ---- 2004 Hautes cotes Beaune Blanc
$260 ---- 2006 Aligote
$535 ---- 2006 Hautes Cotes Beaune Rouge
$555 ---- 2006 Hautes Cotes Nuits Rouge
$735 ---- 2006 Cotes Nuits Villages
$2795 -- 2006 Echezaux du Dessus (95/100 Wine Enthusiast)

Domaine Laleur Piot
"The Domaine Laleure-Piot has made its home for three centuries in the heart of the charming village of Pernand-Vergelesses, a small jewel of the Côte de Beaune region. Nowadays, it is run by Frédéric Laleure, who represents the fifth generation of the family. This Domaine extends over more than ten hectares and envelops fifteen different appellations, offering the complete palette of Pernand-Vergelesses, from the simple "Village" appellation to the famous "Grands Crus" and the best "Premiers Crus". The thirty year-old grapevines are the object of the most careful attentions to guarantee the Domaine a healthy harvest and well-concentrated juices. The grapes are all hand-picked and meticulously sorted. The red wines are heavily controlled during their vinification. After a lengthy cold maceration to extract fruit and freshness, the longer, steady fermentation begins, perfecting the work and revealing the deep colors of the wine. The wine is grown for 11 months in high-quality oak barrels originating from the forests of central France and the Nivernais region (of which 15% are new). “Les Champs Longs” is a small vineyard with soil made of clay and limestone. This deeply colored Chorey-les-Beaune offers red berries aromas. It is very fresh and long." -- Robert Kacher Selections
Case Price
$355 ---- 2005 Pernand Vergelesses Blanc
$510 ---- 2005 Pernand Vergelesses Blanc 1er Cru
$300 ---- 2005 Chorey les Beaune
$430 ---- 2006 Cotes Nuits Villages
$640 ---- 2005 Pernand Vergelesses Rouge 1er Cru
$1500 -- 2006 Corton Rognet Grand Cru
$1595 -- 2006 Corton Bressandes Grand Cru
Domaine Marc Morey
"Domaine Marc Morey is located in the heart of the Côte d’Or, in the center of the village of Chassagne-Montrachet. Although the Morey family name can be traced back for more than five generations in Chassagne, it was in the 1950’s that Marc Morey established this domaine. He constructed the original cave beneath the family’s 100 year-old home and began vinifying his own wines. His daughter Marie-Jo and her husband Bernard Mollard are the current proprietors. They now own almost 10 hectares of Villages, Premier and Grand Cru vineyards and have twice expanded the domaine and modernized the vinification equipment. Bernard and Marie-Jo’s daughter is studying oenology and has joined her parents to work the estate." -- Robert Kacher Selections
Case Price
$350 ---- 2006 Rully Blanc
$455 ---- 2006 Rully 1er Cru Rabource
$335 ---- 2004 Chassagne Montrachet 1er Cru Vergers (6 bottle case)
$335 ---- 2007 Chassagne Montrachet Blanchot Dessous Blanc (6 bottle case)
$680 ---- 2006 St. Aubin 1er Cru Charmois
$1070 -- 2006 Chassagne Montrachet 1er Cru Chenevotte
$1070 -- 2006 Chassagne Montrachet 1er Cru Virondot
$1100 -- 2006 Chassagne Montrachet 1er Cru Cailleret
$1100 -- 2006 Chassagne Montrachet 1er Cru Morgeot
$460 ---- 2005 Chassagne Montrachet ROUGE

Domaine Denis Pommier
"Domaine Denis Pommier was established in 1990 with the inheritance of 2.5 hectares of established vines in Chablis and Chablis 1er Cru from his grandfather. Today the estate is 11 hectares large and includes Petit Chablis. Denis takes great care in the vineyards and farms using only natural products. In the winery he uses both stainless steel and barrel fermentation depending on the vineyard site. The Petite Chablis is fermented and matured in tank while the Chablis AOC has about 20% barrel fermentation and around 40% for the Beauroy and Côte de Léchet premier cru wines. The style of Pommier is very fresh with high toned aromatics and a rich, complete, plush mouth feel. Throughout the range the purity and elegance of Chablis is never lost, enjoy." -- Robert Kacher Selections
Case Price
$260 ---- 2006 Petit Chablis
$315 ---- 2006 Chablis Croix Aux Moines
$440 ---- 2006 Chablis 1er Cru Beauroy
Posted by Paul Hayden at 12:56 PM No comments: