Now that the official release party is over, we have some extra autographed bottles available.

We also like to thank Rick and Lory Ankiel for their generosity and time. They were both very accommodating with autographs and pictures. It was an exciting night as we also had a birthday cake for Rick's 30th Birthday which was at midnight that night!
Since we wanted to make sure everybody would have time to get pictures and autographs we had to turn a lot of people away for this event (the phone was ringing off the hook). If you missed the first party, we have a second event planned at our Provisions Gourmet Market Location on September 17.
We are now taking reservations --- click here.

Here is Rick along with his wife Lory opening the very first bottle of 2006 Rick Ankiel Napa Valley Wine! 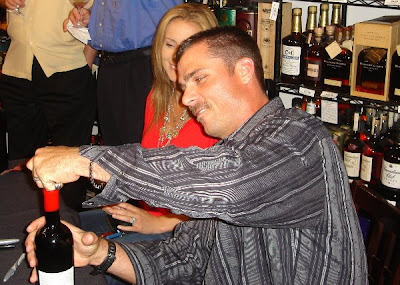 Also if you are on Facebook, search for "The Wine and Cheese Place" and become a fan --- I will post more pictures of the event on our Facebook page.


In stock now ---
Click here to order it online

We now have some extra autographed bottles at Forsyth.

The wine is delicious, there were so many comments at the party on how great the 2006 Rick Ankiel wine was drinking. If you want a great California Cabernet, try this one, you will be very impressed!!! 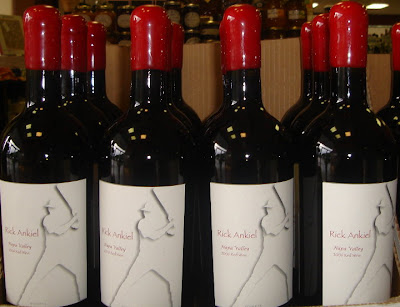 The winebat is here also:
Limited to 100 boxes. Each box will be numbered and autographed by Rick Ankiel. The boxes include a Rick Ankiel bat that has been stained in red wine and 3 bottles of 2006 Rick Ankiel Napa Valley Red wine.
Winebat set - $699.99

Outside of the box:

Inside of the box: 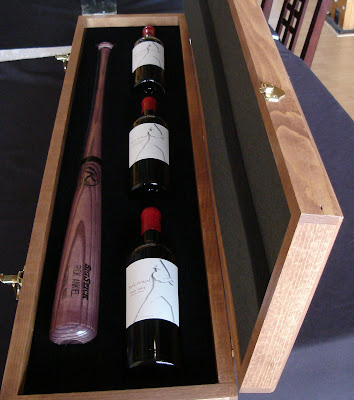 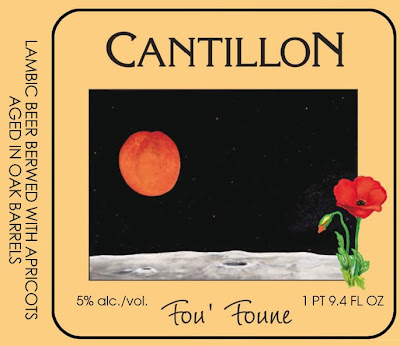 "To create this astounding and unique fruit beer, the Cantillon brewers buy apricots from a vineyard in Bordeaux and pour them into casks of aged lambic. Over three to four months, the fruit dissolves and ferments, and is infused into the beer. The result is a wonderful peachy-apricot aroma and taste, combined with the tart, earthy flavor of honest, wild-yeast fermented lambic beer.
The wonderful "apricot moon" painting for the label was done by Julie Van Roy, daughter of master brewer Jean-Pierre Van Roy. -- importer

(bottles 11/08/08)
Lambic Beer brewed with Merlot Grapes aged in oak barrels.
"Beer or wine? St. Lamvinus is a two-year-old Cantillon lambic fermented in oak casks along with wine grapes from France, and siphoned directly into 750 ml champagne bottles. The type of grapes used, and the winery in France that supplies them, are different every year. The name is a small pun: 'lam' referring to lambic beer, 'vinus' being, of course, the latin for 'wine,' and the whole thing, 'St. Lamvinus,' meant to remind you of St. Emilion, one of the most fabled wine appellations in Bordeaux. It is in essence a union of wine and beer..." -- importer 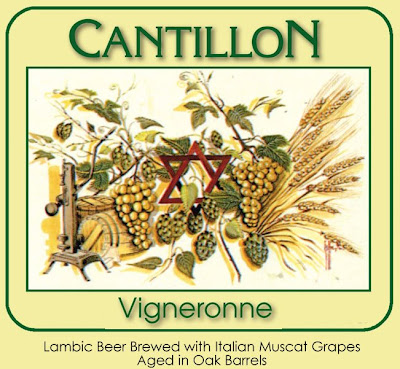 (bottled 12/24/08)
"In October, time of the grape harvest, Italian muscat grapes are added to a few casks of two-year old lambic. After three months, the grape-flavored lambic will be blended to create a small amount of Cantillon Gueuze Vigneronne, a rare traditional style, unique to the Cantillon brewery, with a mild white wine grape aroma and flavor. A wine-lovers' beer!" -- importer

Cantillon Rose de Gambrinus....$8.99 / 375ml
"The most famous framboise," according to beer writer Michael Jackson, and an undisputed World Classic – fully authentic, tart, not sweetened with sugar or syrup like all the rest.
Whole fresh raspberries are fermented in oak casks of Belgium’s classic beer - beer fermented by wild yeasts borne on the open air. Very dry, tart, and fruity, but also funky and complex, as a natural lambic should be. This is the real thing - definitely not one of those artificially sweetened soda-pop beers." -- importer Iris is made in the style of lambic – fermented by wild yeasts and aged in oak wine casks at the brewery – but with a couple of big differences. First, it is made entirely from malted barley, whereas traditional lambic uses one third unmalted wheat. In addition, the brewery has used fresh Hallertau hops in the boil and for dry-hopping the Iris. (Traditional lambic calls for hops that have been aged for several years, which impart virtually no hop flavor to the finished product.)
Iris is a rare and unusual treat to thrill the connoisseur of traditional Belgian beers – absolutely, utterly unique.

Another quick post --
Sierra Nevada Torpedo is back in stock!!
Posted by Paul Hayden at 1:06 PM No comments:

It is a good beer week --
click here to see a summary of what is new and exciting.
(I am sold out of Woodcut #2, but I saw two bottles still at Provisions!!)
Posted by Paul Hayden at 9:41 AM No comments:

"Mikkellers first collaboration brew. Brewed together with our good friends from Westflandern – Carlo, Urbain and Phil from De Struise Brouwers. The beer was created in the spring of 2007 to create a symbol of our close relationship. We choose to cross a heavily hopped Mikkeller beer with a strong blonde – Struise style. From this came the hoppiest beer brewed in Belgium!!! Struise Mikkeller (Elliot Brew) was chosen by Ratebeer.com to be the second beer of their Worldwide Master Series!" -- Mikkeller

RateBeer Special Release:
"Behold the second of RateBeer.com’s Worldwide Masters Series! This request edition ale is the crafted alchemy of a party of some of Europe’s finest brewers, Mikkel Bjergsø and Kristian Keller of Mikkeller (Copenhagen, Denmark) and Urbain Coutteau, Carlo Grootaert, Phil Driessens, and Peter Braem of De Struise Brouwers (Woesten-Vleteren, Belgium).
Both breweries have attracted considerable international attention for their artful interpretations of traditional ale styles enlived by a rich sense of invention. And both are also very highly esteemed by the RateBeer.com international community of beer tasters. We hope you enjoy this unique little treasure.
Struise Mikkeller -- the product of master brewing and friendship. Celebrate this sense of camaraderie by sharing this bottle with your good friends!
- Joe Tucker, RateBeer.com

Struise-Mikkeller is as we said in the past "Best of two worlds". We delivered an IPA with 130 IBU, but a bitterness hidden the Struise way, counter balanced by maltyness, alcohol and rest sugars. People who do not like Ipa's will actually be amazed, the general hop bomb addict will not understand, so yes this is a controverse brew... enjoy anyway!"
Rated 97 percentile on Ratebeer.com
Posted by Paul Hayden at 8:27 AM No comments:

“The Czech Pilsner is a classic ‘Czech-style’ Pilsner of 4.8% alc. vol. It differs from the more commercial Czech Pilsner by being unfiltered and unpasteurized and heavily dry-hopped with Saaz."

Mikkeller Czech-style Pilsner, brewed at De Proef like most of his others, will be released this spring. Mikkel has already tried his hand in the style (sort of), brewing an Imperial Pilsner called Draft Bear which currently sports an A- rating on Beer Advocate" -- http://www.beernews.org/

Posted by Paul Hayden at 7:00 AM No comments: 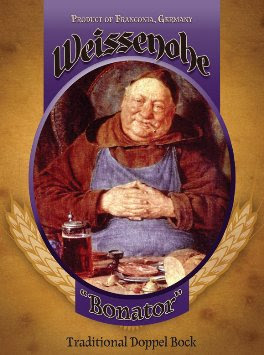 "Legend has it that Doppel Bock was first made by monks as a hearty, full-bodied drink to be consumed in the tough fasting period. This "Bonator" is brewed at the monastery as Weissenohe in the most traditional, painstaking way, using the best ingredients. It is named for Bonifatius, a missionary who came to the monastery long after brewing began in 1050 A.D. No one knows why all Doppel Bocks have names ending with the suffic "-ator". That's just the way it is..." -- brewery

"In 1050, Benedictine monks founded a monastery along a stream in the beautiful green hills of Franconia, in northern Bavaria, and pretty much immediately began to make beer. (Another German monastery, at Weinstephan, claims to be the world's oldest brewery, starting in 1040. But what's ten years in the big scheme of things?) The monks called their new home Weissenohe, meaning "along the white stream" -- a reference to the unusual concentration of limestone in the water (washed down from nearby chalk cliffs), which proved to be great for brewing." -- brewery 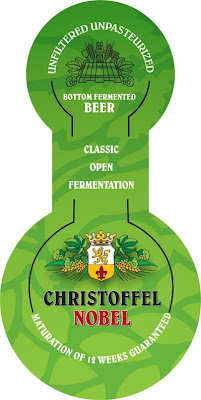 "We're calling it a "Dry-hopped Triple Lager". Basically, it's like a hoppy, bottom-fermented, Tripel. Or a sort of Imperial Pilsner. Or a bigger version of the Bier.

We're receiving it in very limited quantities, so whatever you want to call it, you better grab it quick!" -- importer

"Beerbrewery St. Christoffel is a relatively young brewery, founded in 1986. Our brewery is situated in the former coalmining-town Roermond in Dutch Limburg and named after the patronsaint of Roermond: Saint Christoffel. The brewery started very small and was at first situated behind a house. In 1995 the brewery moved to her present facility. With moving there, the brewingcapacity greatly enhanced due to new brewing-, fermenting- and lagerfacilities. Christoffel brews according to the German “Reinheitsgebot von 1516”: which means the brewingprocess takes place in a completely natural way. Around the year 1990, Christoffel Blond was awarded 3 years in a row with the Dutch title: “Best Beer from the Netherlands”. -- brewery