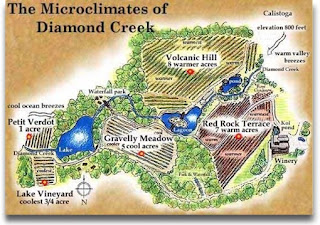 2010 Diamond Creek wines are in stock at Forsyth now. They have not been rated but Diamond Creek has been on a roll and all of their 2009s scored 95+ or higher.


"And the best is yet to come. It’s possible, I suppose, that some $100 Cabs may finally be worth buying!” -- Dan Berger, Wine Writer on 2010 California Cabernet


Our second coolest micro-climate is our five-acre Gravelly Meadow vineyard. Originally a pre-historic river bed, this stony, gravelly soil drains rapidly and the vines struggle for moisture.
Gravelly Meadow is our lowest yielding vineyard. The wines are described as "earthy, cedary, jammy and ripe blackberry with a spicy expansive finish."

Diamond Creek Volcanic Hill 2010....$189.99 / 750ml
Diamond Creek Volcanic Hill 2010....$449.99 / Magnum
Volcanic Hill is comprised of 8 acres of south facing hillside vineyard. It is the warmest of all our micro-climates. The color of the soil is gray, and the consistency is that of fluffy, volcanic ash, originally deposited from the eruption of Mt. Konocti 8 million years ago. Volcanic Hill is the longest lived of our wines. Our winemaker describes these wines as "full bodied, loaded with intense ripe berry fruit, cassis, violets and a smoky richness, finishing with good length and firm tannins."   The Volcanic Hill bottling includes a small amount of the extra-ordinary Petit Verdot grape.

We also have 3 bottles....
Diamond Creek Gravelly 2008....$169.99 / 750ml
A deep, dark beauty, the 2008 Cabernet Sauvignon Gravelly Meadow totally saturates the palate with the essence of blue and black fruit, cassis, bacon fat, mint, flowers and melted road tar. It is at once soft yet massively structured. At times, the 2008 is surprisingly approachable for a young wine from this estate, but then the Diamond Mountain tannins kick in, and it is a different story. Clean veins of minerality frame an insistent finish laced with tar, smoke and plenty of charred aromas and flavors. This dark, brooding beauty should be at its best between ages 15 and anyone’s guess. Today, the Gravelly Meadow is the most complete of the 2008s. Anticipated maturity: 2023-2043.
Rated 95/100 The Wine Advocate

Order Plumpjack online
2010 Plumpjack Cabernet Estate....$93.99
A gorgeous core of juicy red fruit announces the 2010 Cabernet Sauvignon. The 2010 stands out for its expressive, supple personality. There is more than enough fruit for the 2010 to drink well early. The 2010 Cabernet Sauvignon is one of the more approachable wines of the vintage. It should drink well pretty much upon release. Raspberry jam, flowers and cinnamon add lift on the floral, perfumed finish. This is a lovely showing from Plumpjack. In 2010 the new oak, 80%, is a little more evident than is typically the case. Anticipated maturity: 2015-2025.


Order Paul Hobbs online
2010 Paul Hobbs Napa Valley Cabernet Sauvignon...$79.99
The 2010 Cabernet Sauvignon Napa Valley wraps around the palate with mocha, chocolate, violets and new leather. Despite its explosive personality, the straight Napa Valley bottling is pretty approachable for the vintage. I especially like the focus of the finish. In 2010, the Cabernet Sauvignon includes 6% Cabernet Franc. The vineyard sources are State Lane, Stagecoach and Mast. Anticipated maturity: 2015-2025.
Rated 92+/100 The Wine Advocate

Posted by Paul Hayden at 3:42 PM No comments:

The best Macon we have tried in a long time.   I took a bottle home last night and poured my wife a glass and just out of the blue she said "wow, this is great".  She did not know what I poured or what she was drinking.  She was surprised when she found out it was under $20.  I have been ordered to bring more home. 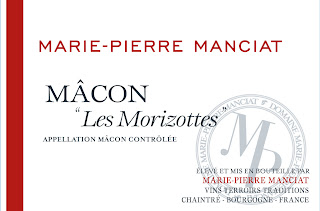 Posted by Paul Hayden at 1:52 PM No comments:

Thursday, Feb 21
Due to the weather, we are going to close early today.
Three of our stores are closed now.
Forsyth will be open until noon.

Baladin Sidro Hard Cider....$14.99 / 750ml
CIDER APPLES
A drink so tied to the land, the tradition and the biblical fruit par excellence, the fruit of sin ... Link between the Belgian franc and the Piedmont tradition of apple juice, our Cider originates from spontaneous fermentation of apples.Fresh and sincere occurs in clear glass and enlivened by a fine perlage. It smells of flowers and meadows in the spring in the mouth leaving a delicate and persistent.

“The apples used are sweet varieties and sour in the same time. They are like “renetta” apple, cultivated in Piedmont and in Savoy. “Savoie” is in France, close to the Alps and half an hour drive from Turin. Savoy is the homeland of the ancient king of Piedmont-Sardinia. Baladin cider is made with an apple variety dating back to the “Dukes of Savoy and King of Piedmont ages.”

In stock now, you can reserve them online now 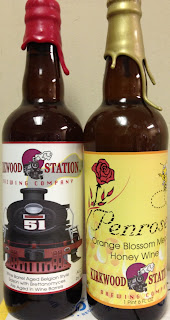 Some info from Dave Johnson - brewmaster
"The beer is a wine barrel aged Saison with Brett, it's called 51. The barrel came from Mt. Pleasant, it's French Oak and had Chardonnell in it previously. The beer was brewed last January (2012), it's a Imp. Saison 8+% and it was in the barrel for almost 11 months. I dry hopped it and added Brett and let it go. We bottled it Wed. (Jan 9, 2013) and it is bottle conditioning. It most likely will be available mid Feb.   I will also have a even smaller quantity of Mead that we are bottling next week, I don't know how many cases till we do it, but most likely around 10. It's a Orange Blossom Mead called Penrose.
Cheers,

Posted by Paul Hayden at 7:41 AM No comments:

As an Emmy Award winning commentator and a five-time National Sportscaster of the Year, Jim has been calling everything from the Masters Tournament, to the Final Four, to the Super Bowl, since joining the CBS Television Network in 1985.

In 2008 he co-authored the New York Times bestseller Always By My Side. The book chronicled his father’s long struggles with Alzheimers disease. On January 19th, 2011, as a response to the enormous following of the book and as a tribute to his dad, Jim opened the Nantz National Alzheimer Center (NNAC) with The Methodist Hospital in Houston. The NNAC is a cutting-edge, world-renowned research and treatment center that hopes to one day find a cure.

Now Jim is following another "calling". For years he had been fine-tuning a concept to create a wine brand that would pride itself on its high quality and great value. He had searched for a business partner who shared his vision and passion and found that person in Peter. He is thrilled to be building something special with Peter while at the same time finding a way to advance the NNAC through another platform.

Some new ones and some back in stock.... 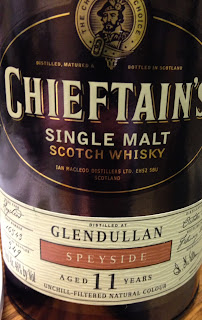 Chieftain Glendullan Speyside 11 year Old...$46.99
Established in 1897, it was the last distillery to be built in Dufftown in the 19th century and the distillery which prompted the “Dufftown is built on seven stills” line. The location was chosen not just for its beauty, but also for its practical convenience. It was sited to take advantage of water power and was also able to share neighbouring Mortlach’s private railway siding. Originally with two stills, an additional distillery with six stills was built on the field between “Old Glendullan” and the employees’ homes in 1971-72. The distance between the two units was defined as “a short one when the weather’s good and a long one when it isn’t”. The old distillery was closed in 1985 and is used as UMGD’s maintenance workshops. Glendullan’s process water comes from the River Fiddich. It was King Edward VIII’s favourite whisky and plays an important role in the Old Parr blend.
Tasting Notes:
Nose: Tomato juice and Worcester sauce, dried cranberry and grassy notes.
Body: Rich, grassy and oily with citrus, melon and some chillies in the middle.
Finish: Chillies and more citrus. An energy drink of its own.

Chieftain Rosebank 20 Year Old Single Malt...$149.99
Distilled in 1990 just 2 years before the Rosebank Distillery closed.  So everything left from Rosebank is in barrel and getting more and more rare.  Don't miss this one aged in Sherry butt. 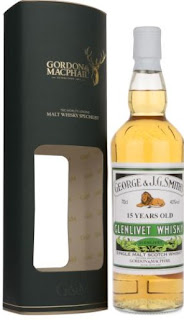 AROMA WITHOUT WATER
Almond notes, with a hint of sweetness, a touch of wood shavings and some fruity aromas.
TASTE WITHOUT WATER
Subtle warmth initially, followed by some spicier cinnamon notes. Creamy and fresh with a touch of tropical fruits.
AROMA WITH WATER
Fresh and fruity, with a hint of malt.
TASTE WITH WATER
Smooth and well balanced, creamy with hints of butter toffee. Hints of ripe plum develops. 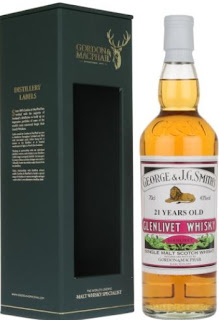 More about Glenlivet:
The origins of Glenlivet Distillery can be traced back to 1815 but it is well known that illicit distilling was going on long before then. In 1817 George Smith leased some land at Upper Drumin Farm, where he continued illicit distilling to supplement his crofters wage. During 1823 an Excise Act was pushed through by the Duke of Gordon - Smiths's landlord - to stop illicit distilling. Gordon then persuaded Smith to take out the first licence and he also helped to set up the distillery at Drumin. Due to the success of Glenlivet, a number of distilleries in the region appended the name Glenlivet to their own. In 1880 J.G. Smith took legal action and the court ruled that there was only one 'The Glenlivet'
Posted by Paul Hayden at 4:25 PM No comments:

Only 99 cases made
2010 Chasseur Pinot Noir Russian River Sexton...$51.99
Quite rich and saturated, with dense wild berry and blueberry flavors, tilted toward jam. Firm, tannic, dry and extracted, with a pleasantly chewy finish. Best from 2013 through 2023. 99 cases made. –JL
Rated 91/100 The Wine Spectator

2010 Chasseur Pinot Noir Russian River....$38.99
Generous, supple plum, raspberry and wild berry flavors are fresh and snappy, with wilted rose and floral scents and fine depth and richness on the finish, where the flavors are pure and persistent. Best from 2013 through 2023. 392 cases made. –JL
Rated 92/100 The Wine Spectator

Posted by Paul Hayden at 1:46 PM No comments: 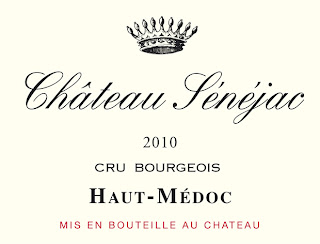 Tasted at the Crus Bourgeois 2010 tasting in London. The Senejac has a superb bouquet with vigorous blackberry, wild strawberry and tobacco-tinged aromas that soar from the glass. The palate is medium-bodied with grippy, dry tannins. There is plenty of substance here with a dash of black pepper and cedar on the finish. Very St. Estephe like: this is an excellent cru bourgeois. Drink now-2018. Tasted September 2012.
Rated 91/100 Neal Martin
This chateau is under the same ownership as Saint-Julien’s Château Talbot. The wine is firm, fruity, rich and concentrated, showing all the best qualities of 2010. There is a complex array of black fruits which are sustained by the firm, solid tannins. Age for at least 6–7 years.
Rated 93/100 The Wine Enthusiast
Posted by Paul Hayden at 7:55 AM No comments: