Sierra Nevada Torpedo Extra IPA...$8.49 / 6pk
This is the first time since 1980 that Sierra Nevada is releasing a new "year round" brew. This brew is using 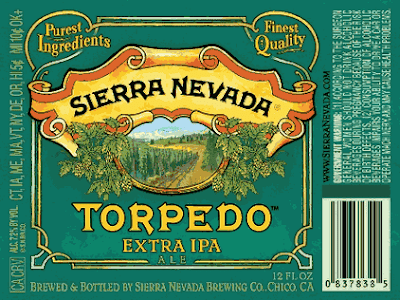 a brand new hop called the "citra" hop. They funded the reasearch and own almost all the acreage in the world of this hop. They have been test marketing this beer for a few years on draft only. I guess the feedback was good, because it is coming out in package this year. The brewery's scheduled release date is January 15, 2009. Hopefully we will see it around that time here in St. Louis. I noticed that it just became offically registered in the state of Missouri--so the paperwork is done!
(Also they registered an Imperial Smoked Porter in Missouri...I believe this will be a draft only.)

Info has been spreading on the beer sites for a few months, but since it is now registered in Missouri, I thought it was worth mentioning.
Label picture take from http://www.beernews.org/
press release from http://www.beeradvocate.com/
Press release:
"About the beer: Contrary to popular belief Torpedo Ale is not a different version of Celebration. The confusion stems from the device itself. The name Torpedo stems from an invention that Ken Grossman and the brewers came up with several years ago. The Hop Torpedo is a cylindrical stainless steel vessel that was developed to harness the essential oils and resins in hops, without extracting bitterness. The device essentially works like an espresso machine. A stainless filter basket is packed full of whole cone hops loaded into the vessel and sealed against pressure. The device is then placed in the fermentation cellars where beer from the cylindroconical fermenters is pushed down from the tanks, through the pressurized column of hops and back into the fermenting tank. The flow of beer out of the tanks, into the Torpedo and back into the fermenter can be controlled to extract different levels of flavor, aroma and bitterness. Essentially, it is a new way of dry-hopping that extracts all of the oily resin without the residual bitterness of the traditional method.The confusion with Celebration came about because Celebration has ALWAYS been copiously dry-hopped. The idea came about because dry-hopping is both difficult, time consuming and wasteful. Also, dealing with dry hopping bags in a 400-600 bbls. Fermenters is an engineering nightmare. (those things are tall!) So, back to the point, the Torpedo was developed to use with Celebration. After years of experimentation, we decided to stick with the traditional method of dry-hopping for Celebration and are using the Hop Torpedo for other inventions.There is also confusion, because Torpedo has been available for a few years as part of our limited draft selection program. We do a limited draft program as a way to have fun and experiment, while producing beers that are not really viable options for yea-round packages. The legalities, and consistency from year to year are not as stringent as with bottled packages. The recipe for Torpedo has varied in the past over a big variable. Essentially we have been polishing the beer and testing the reactions for years! In the forthcoming Torpedo package, we are not only using the new Hop Torpedo method, but also debuting a new variety of hop. We are using a new varietal called the Citra hop. Sierra Nevada ( and two other breweries) funded the research and development of this variety and we own most of the acreage available in the world, (which is something like 3 acres). This hop has a crazy strange flavor profile, leaning toward pineapple, mango, papaya and other tropical fruit flavors and aromas. As always, we use only whole cone hops." -- Bill Manley
The Beer: Torpedo is in a grey area, somewhere between an IPA and a Double IPA...We are calling it Extra IPA...7.4% ABV
IBU's in the high 70's to 80's
Bittering hops: with Magnum
Finishing hops: Magnum, Crystal, Chinook.
Torpedo: Magnum, Chinook, Citra.

Events for everyone: wine, beer, champagne

Posted by Paul Hayden at 7:49 AM No comments:


Come in and ask for a taste, we have one in the freezer at Forsyth.

St. Louis is one of only 4 cities (LA, NY, and Vegas) chosen for the kick off of his new tequila. In fact, it might be the first one -- the importer is located right here in Missouri.


"Singer and native Memphian Justin Timberlake is launching his own brand of tequila called 901 in May. The recipe was originated in Jalisco, Mexico, and the brand has been in development for two years. The name is a nod to the 901-area code of Memphis.
The new line is expected to hit stores in New York, Los Angeles, Las Vegas and St. Louis this spring, but no release date in Memphis has been set. Preliminary pricing is reported at $40 for a 750 milliliter bottle." -- The Memphis Business Journal 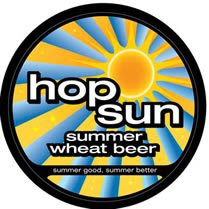 $8.99 / 6pk
Bottled 4/29/09
"Pour Hop Sun Summer Wheat Beer into a pint glass, give it a long whiff and you’ll realize that this isn’t your average wheatbeer. Filtered to a golden clarity and dry-hopped to perfection, Hop Sun is a fantastic session ale in which flavors of wheat, barley and hops commingle to a refreshing and zesty conclusion. Hints of lemon and sweet malts waft to the fore as a touch of bitterness contributes to Hop Sun’s bright finish. Enjoy Hop Sun all summer long as a perfect balance to your outdoor recreation. Summer never tasted so good." -- brewery
4.5% abv • 4.5ºL • American Wheat Ale

order Southern Tier online if you are not in St. Louis

Posted by Paul Hayden at 8:08 AM No comments: