We will start tasting at Rock Hill in two weeks, I will keep you posted.
Posted by Paul Hayden at 10:39 AM No comments:

Loterbol Blond...$5.49 / 11oz
"The Duysters Brewery may well be the smallest commercial brewery in Belgium - annual production of both its beers is only about 650 cases.
Loterbol is a crisp blonde ale that is very tasty and mightily satisfying. It drinks much stronger than its 6.8% alcohol by volume would suggest, and tastes a little spicy, though no spices are used in the brewing. The exotic palate of this beer comes from the unique strain of yeast. Duysters Brewery flourishes in the shadow of one of the world’s largest breweries, Interbrew, in the nearby town of Leuven. But there is no mistaking this exquisite hand-crafted brew for the mass-product of the nearby beer factory. ‘Loterbol’ is a Flemish word for a fool or prankster, an allusion to the deceptive smoothness and drinkability of this beer. " -- brewery
Selected as one of the fifty best beers in the world
by Men's Journal magazine, July 2005.
Posted by Paul Hayden at 11:56 PM No comments:

We are proud to bring these 2 new brews to St. Louis!

De Molen
Rasputin Russian Imperial Stout...$21.99 / 25oz btl
A very small production stout that comes in a vintage looking label and it is corked finished like Champange and then covered in black wax. Very nice packaging. The front label gives you all this information:
Handcrafted Beer
Brewed December 14, 2007
Bottled February 1, 2008
only 524 BOTTLES made and each bottle numbered
This beer can age for 25 years
We only have 6 bottles with bottle numbers #306, #344, #375, #386, #387, and #427

"The most notable beer of the bunch coming overseas is the Rasputin Imperial Stout. According to British Guild of Beer Writer and beer blogger, Ron Pattinson, “[the brewer, Menno] brews it just once a year in very limited quantities. It’s wonderful stuff. You have about two weeks to get to Bodegraven, judging by the depleted shelves, if you want to try the 2007 vintage.” The label (see below) shows that the batch was only large enough to fit 499 bottles. It has not been confirmed whether all bottles will be hitting the states." -- http://www.beernews.org/
Rated "A-" by http://www.beeradvocate.com/

This is their Imperial Double IPA.

only available at our Forsyth location.
Posted by Paul Hayden at 7:28 PM No comments:

Mikkeller - one of the best and hardest to find beers. We already have the Mikkeller Stateside IPA (delicious if you have not tried it) and Jackie Brown in stock. Now we just received the Mikkeller Black Stout and Mikkeller Draft Beer.

"This years Ratebeer Best list has just been released. Mikkeller is placed the 6th best brewery in the world in competition with more than 8.000 breweries! In the top 100 best beers in the world list Mikkeller has four beers - in a competition with more than 76.000 beers." -- Mikkeller
Mikkeller It's Alive...$12.99 / 750ml
Belgian Wild Ale / 8% Alc
Mikkeller's tribute to ORVAL!
"'It's Alive!' is a blonde Belgian ale brewed with brettanomyces. It is inspired by Belgian Orval and has a fresh hoppiness and dry finish. The brettanomyces makes this beer live on in the bottle and will develop it greatly over the next couple years." -- Mikkeller
Mikkeller Monks Brew...$12.99 / 750ml
Belgian Dark Ale / 10% Alc
"Monk's Elixir is Mikkellers tribute to the great trappist monks of Belgium! The beer is names 'Monk's Brew' in the U.S." -- Rated 96 percentile on http://www.ratebeer.com/
Mikkeller Black Stout....$15.99 / 12.7oz btl
17.5% Alcohol---WOW!

One of their hardest beers to find. According to Beer Advocate, it is a one time only brew. Mikkeller's website does not say if it will be brewed again or not. Very rare, get it while you can! (only 12 bottles available)

"Finally Mikkellers strongest and wildest beer till this date is available. We are talking about the beer 'black' with the chinese symbol for black on the label. Black is an imperial stout at 17.5 % vol. - making it the strongest beer ever by a Danish brewery!!!" -- Mikkeller

Brewed at De Proef Brouwerij, Lochristi-Hijfte, Belgium
Very hard to get!
(only 6 bottles available right now, 5 after I drink one)
Alc. 8.0% vol. 750 ml.
"An imperial pilsner brewed with: water, malts (pils, carapils and amber), light candy sugar, hops (amarillo and cascade) and lager yeast. A Danish pilsner is typically characterized by an alcohol content of 4,6% vol., piss-yellow colour and a sexless, slightly bitter taste. But it doesn’t have to be like this…! Draft Bear is Mikkellers interpretation of a ’pilsner’, heavyweight-style. With its powerful hop notes, high alcohol content and lovely golden appearance, the only reference to the pilsner style is the clean taste of the lager yeast." -- Mikkeller
(currently only at our Forsyth location)
Mikkeller website
Posted by Paul Hayden at 4:41 PM No comments:

Baird is the hot new brewery out of Japan. They are making some exciting and interesting beers. Japan is starting to see a brewing revolution. You have the great beers of Hitachino and now try some of the Baird beers.

. Lovingly and authentically crafted, it is unfiltered, re-refermented in the bottle, and naturally carbonated. Please drink contemplatively, Beer Drinker-san" -- Baird

"This original amber ale is inspired by the "Steam" style of beer. Whereas a "Steam" is a lager beer fermented at an elevated ale-type temperature, Red Rose is an ale fermented at a lower lager-type temperature . Like a "Steam," Red Rose combines a crisp lager refreshingness with a robust ale fruitiness." -- Baird

Angry Boy Brown Ale...$4.69 / 12oz
"Angry Boy is a brown ale that doesn't quite fit in; it is bigger, bolder, hoppier and more complex than most. It has, if you will, an angry edge. It is somewhat sweet and very full-bodied in the mouth but piquantly bitter and warming in the finish. If you are feeling angst, this is your brew. " -- Baird 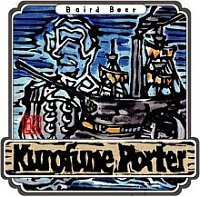 Kurofune Porter...$4.69 / 12oz
"This classic dark English ale is flinty, oily and wonderfully smooth. It is teasingly acrid with notes of bitter chocolate and coffee. The inclination is to resist; the result is acquiescence and embrace." -- Baird

Rising Sun Pale Ale...$4.69 / 12oz
"This quenching brew is crafted in the American west-coast style. It sports a beautiful soft citrus hop aroma which gives way to a round, honeyed-fruit flavor. The finish is crisp and refreshing." -- Baird
Posted by Paul Hayden at 10:40 PM No comments: