cider house located in the apple growing hills of Astigarraga.
Pouring & Serving: Since Basque cider is “natural” and not sparkling the cider is poured by holding the bottle up high above the head and pouring into a glass that is held just below waiste level. Pouring from elevation allows the cidre to pick up some natural carbonation when it hits the glass. Sarasola Sagardotegi is located in the apple growing hills of Astigarraga, which is in the Basque Country region of Spain, near San Sebastian." - importer

"Most Basque cider, as indeed most cider varieties in Spain, is called "natural" because unlike many other European varieties it is still, not sparkling. It normally contains 4-6% alcohol and is served directly from the barrel in a sagardotegi.
The more recent traditions surrounding the sagardotegis hail back to the time when buyers interested in purchasing cider from a particular maker would bring along food for the tasting as it is considered best when taken with a meal.
This soon evolved into gastronomical tradition with the sagardotegis becoming a cross between a grill and a cider house. In a traditional sagardotegi, three courses are taken:
* starter: a cod omelette or cod with peppers
* main: a steak
* desert: cheese (often Idiazabal cheese), quince and nuts" -- importer
Posted by Paul Hayden at 10:07 AM No comments: 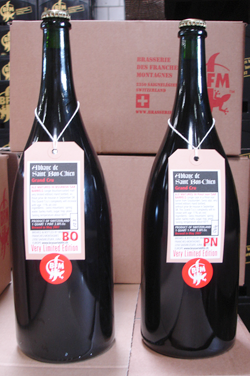 For 2007 we are releasing a limited edition of Abbaye de Saint Bon Chien in magnum bottles. There will be two versions available: PN (Pinot Noir) & BO (Bourbon). Both versions have been aged in a single barrel.
--notes from the importer

Excerpt from The Washington Post
"The United States, it turns out, has declared war on Roquefort cheese. In its final days, the Bush administration imposed a 300 percent duty on Roquefort, in effect closing off the U.S. market. Americans, it declared, will no longer get to taste the creamy concoction that, in its authentic, most glorious form, comes with an odor of wet sheep and veins of blue mold that go perfectly with rye bread and coarse red wine.
The measure, announced Jan. 13 by U.S. Trade Representative Susan C. Schwab as she headed out the door, was designed as retaliation for a European Union ban on imports of U.S. beef containing hormones. Tit for tat, and all perfectly legal under World Trade Organization rules, U.S. officials explained.
Besides, they said, Roquefort is only one of dozens of European luxury products that were attacked with high tariffs. The list includes, among other things, French truffles, Irish oatmeal, Italian sparkling water and "fatty livers of ducks and geese...." -- The Washington Post
read the full article
Posted by Paul Hayden at 11:27 AM No comments:

Somebody posted in the comments --
"Why Tommyknocker? How about Stone? With all the new brands coming in ahead of the beer season some of these brands are going to get lost on the shelf." -- anonymous

I email Stone every few months trying to convince them to come to St. Louis and that St. Louis is a great craft beer town. We would love to get Stone here, but it is not as easy as just calling them and placing an order. They have to want to come to St. Louis and get registered with the state. I still believe if we email them enough they will come here...
Check out my post from February 2nd and email them.
Click here to see Stone post
Posted by Paul Hayden at 2:56 PM 3 comments:

In stock at TWCP Forsyth and Rock Hill and Provisions Gourmet Market. 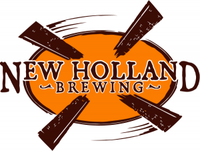 We are proud stock some great new beers from New Holland Brewery. Missouri is only the 12th state you can find these beers. We are lucky to get these in Missouri. I tried them at Cicero's last night and they are delicious!


Full Circle Kolsch...$8.99 / 6pk
"A kölsch-style beer, Full Circle is a refreshing celebration of our brewery's belief in balance. The soft, well-rounded malt character, light hop profile and crisp finish bring us back around to the familiar tastes of classic, thirst-quenching beer. A perfect session beer, we recommend Full Circle with fish, grilled vegetables, grilled sausages, and just about anything else served on a patio." -- brewery

Sundog Amber Ale ...$8.99 / 6pk
"Sundog is an amber ale as deep as the copper glow of a Lake Michigan sunset. Its Biscuit malt gives Sundog a toasty character and a subtle malty sweetness. A great all-around beer for foods of any style, Sundog brings out the best in grilled foods, caramelized onions, nutty cheese, barbecue, or your favorite pizza." -- brewery

The Poet Stout....$8.99 / 6pk
"The Poet has a rich, smooth malt character enveloped in tones of roast and chocolate. A soft mouth-feel brings luxurious flavors and soothing aroma. Any time of year, The Poet is as versatile as it is delicious. It pairs wonderfully with earthy flavors such as mushrooms and beef, while remaining the perfect accent to any chocolate dessert." -- brewery


Later in February, these should arrive--
Dragon's Milk - Ale Aged In Oak Barrels
"The beer you hold in your hand, Dragon’s Milk Ale, is a crown jewel of New Holland Brewing Company. It is the unrivaled result of painstaking processes - both creative and scientific.We could tell you about the centuries-old tradition of the term, Dragon's Milk, or we could tell you about the history, craftsmanship and challenges of important, the beer inside this bottle.Expect a complex ale with a soft, rich caramel-malt character intermingled with deep vanilla tones; all dancing in an oak bath. Unmistakably distinctive example of New Holland’s Art in Fermented Form." -- brewery

www.ratebeer.com has posted the new list of the RateBeer Best 2009 -- AWARD RESULTS -- click here for full results
"(Santa Rosa, CA) Nearly 2 million times, RateBeer.com beer reviewers worldwide have raised a glass to review a new beer. The RateBeer administrators have tallied the scores and presented them in the their annual RateBeer Best competition results. As it has been for the last 8 years, RateBeer Best was again the largest beer competition in the world -- over 1.97 million reviews of 91,000 beers from over 8700 brewers worldwide were tallied. A particular emphasis was placed on tastings from the last year's performance. Additionally, brewpubs, bottle shops, restaurants and bars around the world were awarded prizes. Cheers to all the winners and to everyone who keeps the magical world of craft beer growing!" -- ratebeer.com

Red font we have in stock at our stores. The others are not available in St. Louis.
Posted by Paul Hayden at 10:13 AM No comments:

We need to try to push Stone Brewing into distributing in St. Louis.
I think if we

give them a nudge with emails showing our desire to get "Arrogant" in St. Louis it might happen. I have sent my email!
Send them an email----
email@stonebrew.com

This is on their website:
"How to get the Arrogance in your area:
This proceedure can potentially take a bit of time and effort, but success will be its own reward.
In order for Stone or Arrogant Bastard Ale to be available in a particular area, it is necessary to obtain an existing distributor of beer for the that area. This is often problematic. Most distributors are overloaded with items and have scant time to review and analyze new things. Much of their decision making is based upon "old-boy" contacts. As you might guess, brash young upstarts like us at Stone are not part of the old-boy networks.

Every time we contact the distributors in a new area, we get comments like "We're overloaded on items," "We don't have the time to consider something new right now," and "I've never heard of Arrogant Bastard Ale, [I cannot imagine somebody saying this] besides people want imports right now and that 22oz micro segment is dying." How sad for them to be so unaware of the Arrogance.

We have won out over Ignorance in many areas based upon the following theories:
(1) Smart business people listen to their customers. (2) Most distributors are actually fairly smart people, and their customers are pubs, restuarants and markets. (3) If these customers are asking for the Arrogant Bastard Ale, the distributor will be more interested in carrying the beer.

Of course, this only happens because the customers of these bars, restaurants and markets are demanding the Arrogance! If enough people ask often enough, the message will eventually get through to the powers that be.

Don't be shy. Let your message be clear. Tell the MANAGEMENT (don't waste too much time talking about the Arrogance to non decision makers) at your favorite pubs, restaurants and markets that you would like them to ask their distributors for Arrogant Bastard Ale. In the meantime, you'll get it through

mail-order or other methods which means lost dollars for them. Always make
sure that you are polite with your request. Remember, there is a fine line between being an Arrogant Bastard and an Obnoxious one. Smart managers won't be interested in going out of there way to bring something in for somebody who
is a jerk." -- Stone Brewing

Thanks for helping to spread the Arrogance! - Stone
www.stonebrew.com
Posted by Paul Hayden at 9:51 PM No comments: