New beers from Switzerland
First time in the U.S.
Biere Trois Dames
The Trois Dames (3 ladies) are his wife and 2 daughters. He named the brewery after them because of all the time he spent away from them getting it going. He (Raphael) is actually the artist of the Swiss labels. The labels in the U.S. are different than the Swiss labels. 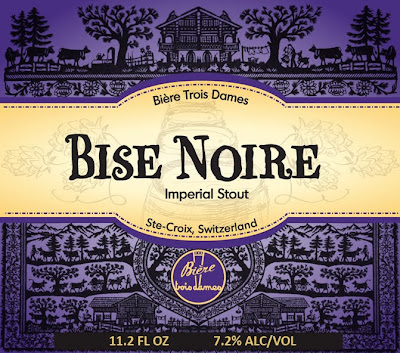 "La Bise Noire is back, only with a tweaked recipe for a better match with the rest of our range. A black ale based on a malt gist designed to give it the fulness, roundness and presence needed for a winter beer, yet keeping clear of being sickly sweet. At 7.2% ABV, it is to be approached with caution." -- brewery 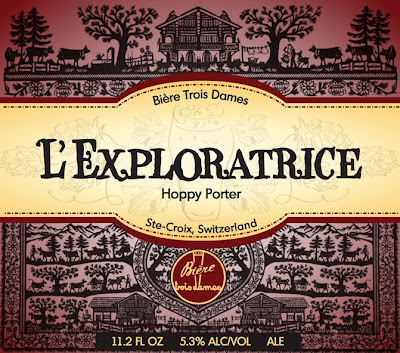 Hoppy Porter
(Called India Brown Ale in Switzerland)
"My take on a porter with a reinforced hop character: 50 IBU for only 5.2-5.5% ABV. Almost the hop charge of an IPA, but with a solid dark, roast malt backbone, Brewed once or twice a year." -- brewery 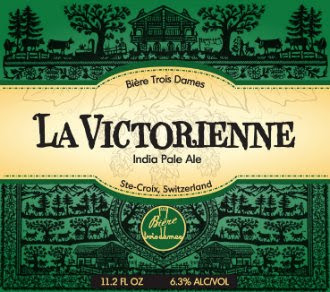 India Pale Ale
"A beer for hop lovers, bursting with flavours at 6.3% ABV. IT makes full use of the flavour potential of US hop varieties such as Chinook, Columbus and Simcoe. Try it along with an indian curry or a spicy couscous, you'll love it !" -- brewery 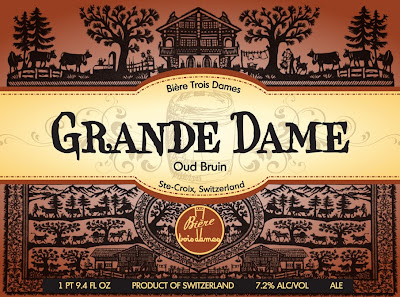 Oud Bruin
Rated 95/100 RateBeer
"Born of a chance meeting with a strong and stout fermenting apricots Valais who never attained the alembic distiller which it was intended, our Oud Bruin (Flemish for "old brown") is an interpretation rather unorthodox its Belgian cousins. She cautioned, however, the delicate balance of sweet and sour, malty backbone between a solid foundation on malts, caramel notes, chocolate, toast and fruit, which crosses over the apricot wine with lactic acidity, hints of leather Barn and related wild yeasts, and a discreet note of apricot. The finish is slightly bitter and everything goes in harmony on the palate.A unique beer, a large buvabilité but nicely complex, with its sweetness, fruitiness and acidity. She is married with lamb, duck, mussels, shellfish or soft cheese or semi-hard." -- RateBeer Commercial description

Posted by Paul Hayden at 7:23 AM No comments: 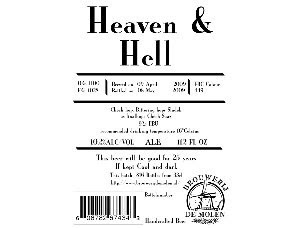 Heaven & Hell Imperial Stout
10.2% ABV
Brewed November 23, 2009
Bottled January 08, 2010
This beer will aged 25 years
50 cases made of this batch.
Each bottle finished in red wax.
Rated 99/100 RateBeer
Twice the amount of dark roasted malts used, massive Imperial stout. This is a mad one. Black brown colour with a thick and creamy tan head that can be added to as you wish if you give the bottle a swirl. Give this beer time to breathe and blossom into something truly stunning. Chocolate and alcohol are right there at the front but do not at all overpower the gorgeousness that is underneath. Full of leather, vanilla, amazing wooden notes, beautifully floral character from the hops, thick Belgian chocolate, much character. The flavour of crazy wooden tartness. An extremely bitter finish seems to come out of nowhere and is what really makes this quite unique. Superb width in the mouth and coats the whole palate beautifully. 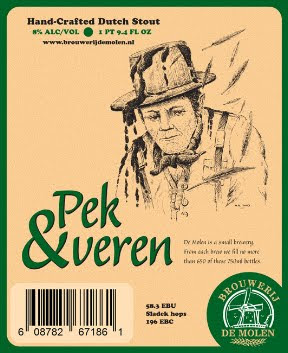 Tar & Feathers -- Smoked Barleywine
In the old west it was custom to treat crooks, quacks and charlatans with tar and feathers. Then they were driven out of town backwards on their horse or donkey. At least, if you can believe the Lucky Luke comics. Did you know that Louis Pasteur in the beginning of his career was regularly accused of quackery? And now he is regarded as one of the main founders of microbiology. Brewers to this day still much profit from his findings. But we do not like pasteurizing like many large breweries do because that kills the beer. Our Pek & Veren is a beer that is similar to a solid doppelbock with smoke flavour. 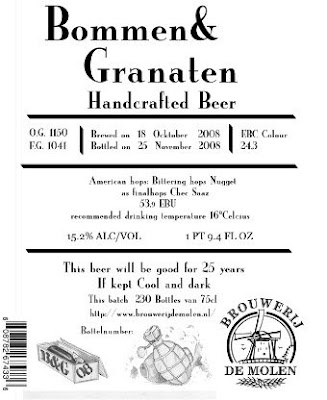 Bombs and Granades - Barleywine
Rated 94/100 RateBeer
Brewed Jan 2010
Bottled Feb 2010
This beer will age for 25 years
This batch produced 50 cases
"With 15% ABV is was more than obvious that we had to name this dessert beer Bombs and Grenades. The use of champagne yeast has had it’s effect on both flavour and body. There’s plenty of fruit like orange, tangerine and sweet apples. It’s powerful and full bodied but still easy going. Although the name would suggest otherwise it’s our favourite amongst the female clientele yet also highly appreciated by the other sex." -- De Molen 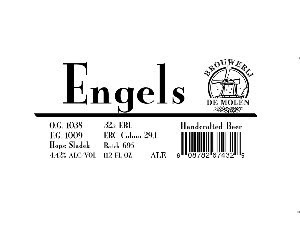 English Bitter 4.42% ABV
Hops: Sladek
Batch: 695
Our attempt at creating a real English cask ale. And we certainly succeeded. At the Great Brittish Beer Festival our Engels was appreciated by all that tried. Cask ale from the continent? Yeah! Also available bottled by the way. 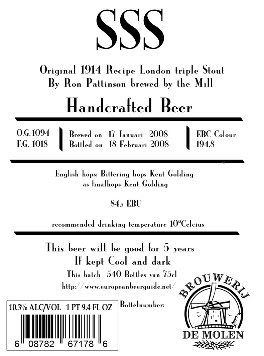 Rated 97/100 RateBeer
Brewed March 25, 2008
Bottled May 9, 2008
"SSS Triple Stout was a collaborative brew between brewmaster Menno Olivier and beer historian and respected blogger Ron Pattinson. The recipe is Pattinson's recreation of a triple stout from 1914 London. The original was brewed on July 8th 1914 right at World War I was beginning. Pattinson mentions that considering its strength, this original brew of SSS was very large - 230 barrels." -- importer

"The Original Porter. Or a recreation, at least. 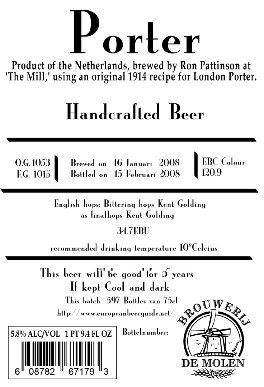 Beer historian, and respected blogger, Ron Pattinson collaborated with De Molen brewmaster Menno Olivier on this historic treat. It's a taste of what the "original porter", brewed by London's Whitbread Brewery, would be like without having to travel back to pre-WWI days. Whitbread was known to be one of the largest producers of porters during this time and brewed their original porter on August 1, 1914, only a few weeks before the outbreak of World War I." -- importer

"Pattinson also collaborated with Olivier on De Molen's Triple Stout, another historic reproduction. According to Pattinson, he chose these recipes because he wanted to:
-show what British beers were like before the dramatic changes of WWI
-demonstrate the relationship between British Porter and Stout
-show the defining characteristic of London Porter and Stout - the use of brown malt

Both beers were brewed in extremely limited quantities. Even Pattinson himself laments how difficult they are to get his hands on: he only received 6 bottles of each. De Molen shared the remaining 754 bottles with us.


Share
Posted by Paul Hayden at 8:01 PM No comments:


In the early part of fall 2008, a small Danish brewery, Bryggeriet Djævlebryg, released a new Imperial Stout titled, “Gudeløs.” Which translates to “Devil’s Brew” and “Godless” in English. The beer caused a small stir and even earned a few mentions in the mainstream press here in the U.S. despite only being available in Europe.
Read more on beernews.org 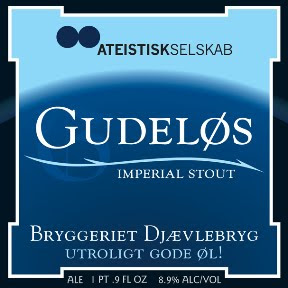 “Devil’s Brew and the Danish Atheist Society have entered into an unholy alliance, and the result is Gudeløs (Danish for ‘Godless’) – an ale brewed entirely without superstition. Gudeløs is an imperial stout with burnt and sweetish impressions, together with notes of licorice. To exercise social responsibility, Devil’s Brew donates one Danish Crown to the Danish Atheist Society for each bottle sold.” - label

Share
Posted by Paul Hayden at 10:04 PM No comments: 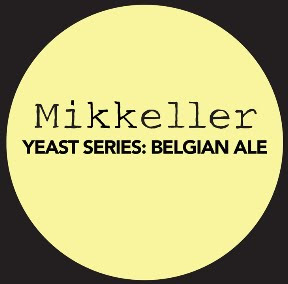 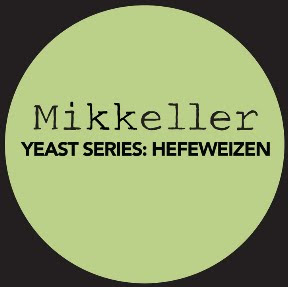 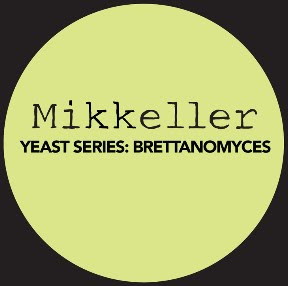 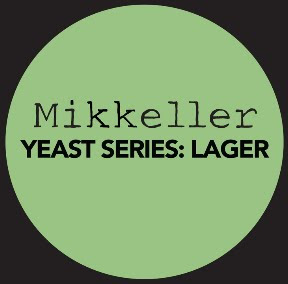 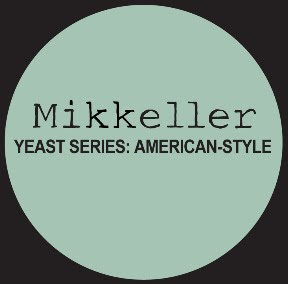 Share
Posted by Paul Hayden at 8:22 PM No comments:

Bells back in stock!

A fresh batch of
Bell's Two Hearted Ale (on sale this week)
and Bell's Oberon
are now in stock.