The latest from Great Divide to hit STL...

Accolades and other buzz on Hades:
Top 25 Beers, Best of BeerAdvocate.com , 2007

Posted by Paul Hayden at 8:56 AM No comments:

Just arrived at Forsyth...
We will feature Anderson Valley this Friday night for our weekly tasting...(11/7) more details on Thursday.

"We carefully craft our world-class ales using only the finest ingredients; premium malted and roasted grains, hops, yeast, and pristine Boonville water straight from our own unique aquifer, and we never heat pasteurize or sterile filter our beers. Our tradition of carefully crafting inspired, flavorful, ales of the highest caliber has earned numerous awards, a loyal following, and our two-time placement among the World Beer Championships® Top Ten Breweries of the Year. "
-- Anderson Valley

"With its deep, dark brown-black color, thick, full-bodied, velvety-smooth mouth feel, mocha character, and, strong yet subtle hop bite, Barney Flats Oatmeal Stout is one of the thickest, richest, and most complex stouts on the market today. In 1990, it became our first gold medal winner, at the Great American Beer Festival. Barney Flats was judged so superior to the other stouts that no other medals were even awarded in its catagory. Try it and see why Stewart Kallen described it as, "Slippery, creamy, dark, and sweet as a Pacific May morning," in his book, The 50 Greatest Beers in the World "
-- Anderson Valley

"Boont Amber Ale just won the Silver Medal at the 2003 Great American Beer Festival , in the American-Style Amber/Red Ale category, has several other medals , as well, and was named the "best beer brewed in Northern California," by the San Francisco Bay Guardian.
Boont Amber Ale is a medium bodied pale ale with a beatiful copper color, a robust head, and the rich flavor of caramel malt. This very smooth and exceptionally drinkable beer is excellent with steaks, chicken, pasta, and other flavorful meals.
As with all of our products, Boont Amber Ale is never sterile filtered nor heat pasteurized, and should be stored in refrigeration. However, to fully enjoy its rich and complex flavor, it should be served between 40° and 45°F
5.8 % Alcohol by Volume
"It's bahl hornin'."
-- Anderson Valley

"Boont ESB (formerly Belk's ESB) Exceptionally Great; something special -- Celebrator Beer News Blind Tasting Panel - Oct. / Nov 2004
The abundant hopping in this four-time gold medal winner, creates arousing aromatics, accompanied by a pleasantly bitter bite. Boont Extra Special Beer is deep gold in color, with a spicy hop aroma. Starts with a big, malty backbone and finishes with a refreshingly bitter bite. Boont Extra Special Beer is excellent alone or as an accompaniment to your favorite well-seasoned meals (such as Mexican, Korean, Chinese, Indian, or Thai, cuisine).
Boont ESB was recently named the Regional Champion in the 2003 US Beer Tasting Championships, in the Bitter/ESB category, has won two Gold Medals at the Great American Beer Festival, and has several other medals, as well. Click the blue ribbon to see the entire list.
As with all of our products, Boont ESB is never sterile filtered nor heat pasteurized, and should be stored in refrigeration. However, to fully enjoy its rich and complex flavor, it should be served between 40° and 45°F
6.8 % Alcohol by Volume
"It's aplenty bahl steinber horn."
-- Anderson Valley

Hop Ottin' IPA is as hoppy as they come. The name means "hard working hops," in Boontling, and that tells it all. Generous additions of high-alpha Pacific Northwest hops added during a vigorous boil, plus traditional dry hopping, with whole hop cones, give this ale a delicious citrus aroma, and an intense hoppy bite. This IPA is a hop lover's dream.
Hop Ottin' IPA most recently received a Silver Medal from the 2001 World Beer Championships, in the India Pale Ale category, and has several other medal as well. Click the blue ribbon to see the entire list.
As with all of our products, Hop Ottin' IPA is never sterile filtered nor heat pasteurized, and should be stored in refrigeration. However, to fully enjoy its rich and complex flavor, it should be served between 40° and 45°F
7.0 % Alcohol by Volume
"Hop Ottin' bites like a can-kicky bluetail."
-- Anderson Valley

"When the phrase "California Style Ale" is used, Poleeko Gold Pale Ale is the one that comes to mind. The golden color and generous use of Pacific Northwest hops establish a distinct style, separate from any domestic or European beers. Our honey-gold pale ale is crisp and clear, with an unusual lightness and dryness for such a full-flavored ale. The arousing abundance of hops adds both a floral bouquet and a lively, citrusy finish. It is excellent alone, or with full-flavored meals and spicy dishes.
Poleeko Gold Pale Ale recently was named the Regional Champion in the 2003 US Beer Tasting Championships Summer Competition, in the Golden Ale/Kolsch category, and has several other medals, as well. Click the blue ribbon to see the entire list.
As with all of our products, Poleeko Gold Pale Ale is never sterile filtered nor heat pasteurized, and should be stored in refrigeration. However, to fully enjoy its rich and complex flavor, it should be served between 40° and 45°F
5.5 % Alcohol by Volume
"Rudy nebs, heelch hops, and malted barley make Poleeko Gold plenty bahl with any gorms."
-- Anderson Valley

This fine holiday brew was awarded Gold Medals in 1997 and 1998 by the World Beer Championships , and was named their 1998 World Champion Winter Ale .
From the first sip of Winter Solstice Seasonal Ale , your senses will be aroused with the vision of a glowing fire, warming the hearth and home, as gently drifting snow flakes silently blanket the trees outside. Each lingering sip will gently warm your soul with thoughts of family and friends, gathering around the table for the feast. Luscious, creamy, smooth, and warming, this medium bodied ale is brewed with Caramel and crystal malts to give it just a hint of sweetness, then paired with our private blend of holiday spice. Winter Solstice Ale is great alone or as an accompaniment to any meal, and it has been known to liven and spice up nearly any social event. This coveted and much sought-after brew is released in November, just in time for the holidays, and by the first of the New Year will be only a fond memory.
As with all of our products, Winter Solstice Seasonal Ale is never sterile filtered nor heat pasteurized, and should be stored in refrigeration. However, to fully enjoy its rich and complex flavor, it should be served between 40° and 45°F
6.9 % Alcohol by Volume"
-- Anderson Valley
Posted by Paul Hayden at 10:09 AM No comments: 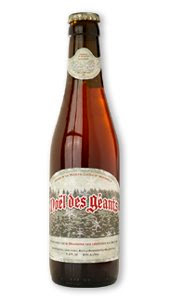 "The Brasserie des Géants, or Giant Brewery, is housed in a medieval castle in the town of Irchonwelz, in the French-speaking south of Belgium. The Géants Christmas [first produced in 2007] . Rich and warming, and just a bit spicy (thanks to the delicate addition of a special aromatic herb from the region of the brewery), this festive ale has everything you want in a Belgian beer – but not the cheap sugary flavor that the more commercial breweries use to reel in a less sophisticated crowd." -- importer
From one of my favorite brewers...
Mikkeller Santa's Little Helper...$12.99 / 750ml 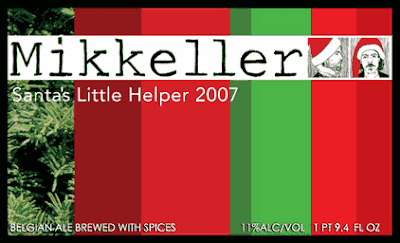 "The name "Julebuk" refers to an old Danish game played during the holidays. Our Christmas brew is a reddish-brown, full bodied German-style bock. Its aroma and flavour come principally from Munich and caramel malts, but our blend of Christmas spices discreetly enter into the palette of flavors. Julebuk is created to celebrate the warmth of the holidays and to help see you through the cold of winter." -- Brewery
Nogne-O Winter Ale...$8.49 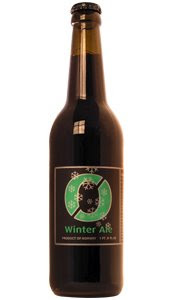 / pint
"A dark ale brewed specially for the Christmas season, with a rich, complex taste of caramel. This is a strong, dark and rather sweet Christmas Beer – just the way we think a Christmas beer should be. ecommended serving temperature 12°C/53°F. Great with cheese or nuts. Ingredients: ager, Munich, caramel, black, and chocolate malt; Chinook, Columbus, and Centennial hops; English ale yeast, and our local Grimstad water." -- brewery 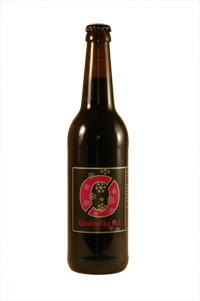 "The name of this beer is "Peculiar Christmas" in english. This spiced Christmas ale is strange - and indeed a fusion beer. We have gathered inspiration from the Norwegian drink “gløgg”, and as such this is quite an uncompromising brew. Best served with “goro” and “fattigmann” [Danish cookies]. Recommended serving temperature 10°C/50°F, but you are free to try on higher temperatures....
Ingredients: Maris Otter, Munich, caramel, and chocolate malt; Columbus and Cascade hops; 5 different spices, English ale yeast, and our local Grimstad water." -- brewery

Posted by Paul Hayden at 2:18 PM No comments: