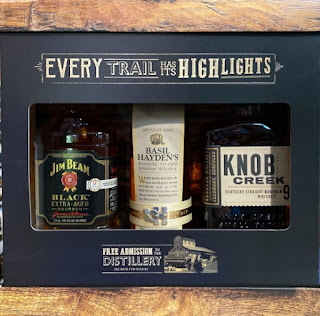 What do you do when awarded the International Wine & Spirits Competition’s 2016 Bourbon Trophy? You don’t change a thing. That’s why Jim Beam Black is, and always will be, extra-aged to taste and bottled only when it’s just right. The result is a full-bodied bourbon with an extra level of elegance and refinement that’s meant to be sipped and savored. And of course, just like its younger brother, our original Jim Beam®, it’s best when shared with others.

Crafted in 1992 by Booker Noe as part of the Small Batch collection, Basil Hayden introduced a more subtle side of bourbon compared to its counterparts.
This style of bourbon was inspired by 1792 whiskey pioneer Meredith Basil Hayden, Sr., a rye farmer from Maryland who moved to Kentucky and began distilling. He chose to distill his bourbon with a higher percentage of rye, and Booker set out to create a similar high-rye mash bill that would offer the same refined, approachable taste profile.
Today, this bourbon stands as a tribute to Meredith Basil Hayden, Sr.’s high-rye mash bill ingenuity, as well as to Booker Noe, a true innovator who sought to welcome new drinkers into whiskey.

When it comes to making Knob Creek Bourbon, there's a lot of waiting but hardly any sitting around. While each barrel patiently ages in white oak, our distillers continue to raise the standards, fulfilling their commitment to full flavor. The result? An unflinching balance of deep, pre-Prohibition-style bourbon with a robust oak taste, complemented with hints of smooth vanilla and layered caramel.