The return of Tenuta La Massa

In stock now at Kirkwood (Forsyth will get some Wednesday)

La Massa is a gem in the heart of the Chianti Classico region that was purchased by Giampaolo Motta in 1992. Motta left behind his family's leather business in Naples to learn to make wine in Italy. While he truly loved the rolling hillsides of Tuscany, he realized that his palate favored wines from Bordeaux. When he purchased La Massa, he decided that his terroir was just as well suited for Bordeaux varietals, so he planted Cabernet Sauvignon, Petit Verdot, and Merlot alongside his Sangiovese vines, as well as a small amount of Alicante Bouschet. The late 2000's were kind to Motta and La Massa wines started gaining notoriety, particularly with Robert Parker, who touted the winery as one of his favorites in Panzano-in-Chianti. Motta's friend and rock star consultant, Stéphane Derenoncourt (think Pavie-Macquin, Smith Haut Lafitte, and dozens of others) helped the winery ascend to heights it enjoys today.

These wines have been out of the market for a while, and boy are we happy to have them back! Lovers of the "Super Tuscan" style of wine should seek these wines out. They are approachable in their youth, but age gracefully as well. 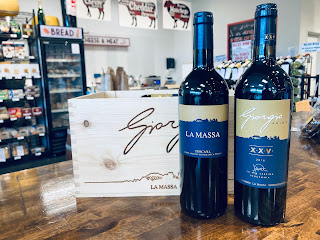 2018 Fattoria La Massa "La Massa" Toscana Rosso...$24.99/bottleA blend of mostly Sangiovese with smaller parts Merlot, Cabernet Sauvignon and a touch of Alicante Bouschet, the Fattoria la Massa 2018 La Massa is a textured and softly pliable wine that shows gorgeous color saturation and a panoramic bouquet with black fruit, dried cherry, plum, spice and sweet tobacco. This vintage offered moments of heat and moments of coolness, and the whole approach is balanced quite nicely in this bottle. I give it a solid 10-year drinking window, and you get great value. Rated 93/100 Wine Advocate

2016 Fattoria La Massa "Giorgio Primo"...$99.98/bottle on saleThe consistency and depth of this wine is just incredible. Like the Carla 6, the 2016 Giorgio Primo shows an inky dark color, almost totally black, with penetrating fruit and long waves of rich fruit flavor throughout. George the First casts mesmerizing spells of spice, tar and smoke. This is a blend of 50% Merlot, 45% Cabernet Sauvignon and 5% Petit Verdot. This is another outstanding effort from Fattoria La Massa and its eccentric but visionary founder, Giampaolo Motta. Some 16,000 bottles, magnums, double magnums and other large formats were created. Rated 98/100 Wine Advocate