Our Fourth Blue Note barrel!
St. Louis Blues win their 4th Game to advance!
Again we were the good luck for the Blues! 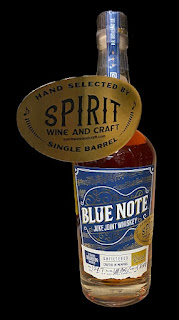 This barrel celebrates the opening of our newest store Spirit Wine and Craft!!
opening this month!! 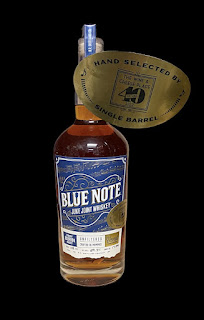 
Blue Note Juke Joint Survivor Barrels
In June of 2019, the rickhouse that stored much of Blue Note’s inventory collapsed in a terrible summer storm, spilling thousands of barrels and millions of dollars into the muck and mud. Most of the barrels were destroyed by the incredible force of nearly 10 million pounds crumbling six stories to the ground.

We thought all was lost, but a special few somehow survived the disaster. Surviving the collapse, however, turned out to be only the beginning of the barrels’ journey.

For the next four months, the barrels were left exposed to the elements before the wreckage could be properly assessed and cleaned up. In these ensuing months, the sweltering summer heat bore down upon the barrels day after day, darkening the outside and forcing the bourbon inside incredibly deep into the oak. Several thunderstorms passed through as well, pummeling the barrels for days, causing their bands to later rust and break. As summer faded into fall, the nights grew colder, forcing the whiskey back out of the now worn oak. After the wreckage was cleaned up and every barrel was assessed, the company found that indeed some had survived.

Like these barrels, we have all faced incredible hardships across the course of the pandemic as the safety, stability, and comfort of the shelter we took for granted collapsed all around us. In an effort to celebrate life and perseverance, we have curated from our special lot of survivor barrels a select few barrels to release to the market under our new Blue Note Bourbon Uncut label. Going forward, not every barrel of Blue Note Bourbon Uncut will be a survivor barrel. Therefore, if you want to taste a truly rare bourbon with an even rarer story, we encourage you to try a bottle of this year’s 2021 survivor barrel release.
Posted by Paul Hayden at 2:50 PM