Tasting at all 5 locations!
Saturday October 29th from 11am -2pm

Amazing single vineyard Macon!!!
This is a customer and store favorite white Burgundy
2021 Les Gentilhommes Macon Peronne....$26.99
100 % Chardonnay -- Single Vineyard from the heart of the Macon
This single-vineyard Chardonnay is produced in the village of Péronne, in the heart of the Maconnais region in Burgundy, from 40 year-old vines planted on the limestone based soils of the Mount Epin. A beautiful golden color with green reflections, delicate toasty notes and attractive aromas of citrus and ripe summer fruits combine with floral and honey nuances that are typical of the old vines. Fresh, ample and full-bodied on the palate, the wine is perfect by itself as an aperitif and delicious during the meal. 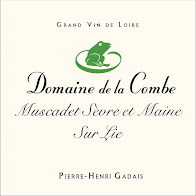 2019 Domaine de la Combe Muscadet Sevre et Maine...$18.99
The Vineyard is located in the "lieux dit » La Pétière in Saint-Fiacre distinguished by its particular topography named « Combe » which is a sort of valley. Today Pierre Henry Gadais is the only wine grower to own this terroir. For this reason, it is considered a Monopole. In addition, « La Pétière », located nearby, used to be a pre-historic village. With a total of 9 hectares, planted with Melon de Bourgogne, the vineyard is one of the last to exclusively produce Muscadet. Pierre Henry has always believed in the Melon but also in the traditions. For him, the new generation is changing the variety and by doing so, losing the appellation. Pierre Henry does not want Muscadet to become a new world wine region.

Import information and terms about this wine:
Sèvre et Maine: The Muscadet Sèvre et Maine is a vineyard area that extends across about twenty communes to the south east of Nantes. It takes its name from the two rivers flowing through the vineyards: the Sèvre Nantaise and the Maine.
Sur Lie: French for "on the lees". Aging wines sur lie means they are kept in contact with the dead yeast cells and are not racked or otherwise filtered. This is done with mostly white wines to enrich them and add more complexity.
Grape: Melon de Bourgogne
The grape of Muscadet! Melon de Bourgogne originated in Burgundy (hence the name), but was removed for other grapes that thrived better there. Melon's ability to survive frost made it ideal in the Loire. When aged on the lees it produces a crisp, dry and complex white wine that is perfect with everything found in the ocean. Great wine with seafood.
Monopole: An appellation or designated winegrowing region controlled entirely by one winery.
Posted by Paul Hayden at 2:23 PM