Grape: Cabernet Franc
Cabernet Franc is a black-skinned French grape variety grown in most wine producing nations. The variety is most famously known as the third grape of Bordeaux and can be found in many of the world’s top Bordeaux blend wines. Cabernet Franc most commonly appears in blended red wines, where it adds herbaceous accents of tobacco and dark spice.

Cabernet Franc prefers cool, inland climates such as the Loire Valley. The towns of Chinon and Saumur-Champigny are important historical bastions of varietal Cabernet Franc wines, which are prized for their ripe berry and spice elements. Lighter examples from these appellations generally exhibit graphite and red licorice notes, with darker wines showing more cigar and leather aromas. 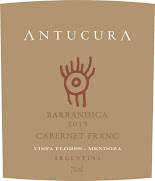 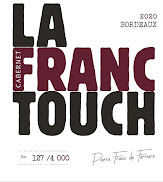 1 bottle each of the 6 wines below = $176.94
Special Sampler price only $155 / for the 6 bottles!
Read more about the wines and to order them individually

2019 Antucura Barrandica Cabernet Franc...$19.99
Mendoza, Argentina
This has attractive red-berry aromas with a thread of green pepper and fresh herbs on offer. The palate has a smooth-honed feel with supple, neatly balanced tannins. Drink or hold.
Rated 92/100 James Suckling

2019 Luccianus Amphore Lussac Saint Emilion....$49.99
100% Cabernet Franc
Bordeaux, France
100 Year Old vines
Luccianus is the name of Gallo-Roman origin designating the town of Lussac and its vineyard dating from the 4th century. This 100% Cabernet Franc is produced from the estate oldest vines of 100 years of age and is a return to ancestral aging techniques. The amphora aging gives out a very expressive wine with a superb aromatic radiance and very silky tannins all without a woody note.
The wine shows a beautiful deep purple color. The nose is complex and rich with intense notes of fruits and spices. The palate is round and powerful with silky tannins.
Rated 92/100 The Wine Enthusiast

2020 Carbonneau La Franc Touch Cabernet Franc....$29.99
100% Cabernet Franc
Bordeaux France
WINEMAKING: Manual harvest in the morning to preserve the freshness of the fruit. Maceration at 8 ° C for 5 days to extract the fruit without moving the harvest. Short maceration and fermentation in indigenous yeasts at 24-26 ° C with very little intervention on the wine. 20% whole clusters.
TASTING: On the nose there is a mixture of fresh red fruit, mint and violet. The wine expresses the liveliness of Cabernet Franc, both ripe and fresh from the Bordeaux clay-limestone terroir. On the palate, there is a good acidity which gives length to balance the sweetness and the roundness of the fruit.  The estate will be full organic status in 2022 and biodynamics by 2023

2020 Charles Joguet Chinon Cuvee Terroir....$27.99
100% Cabernet Franc
Loire, France
Chinon “Cuvée Terroir” : • A blend between a parcel from Beaumont-en-Véron with the alluvial soils of the left bank of the Vienne River, along with press wine from all the other cuvées of the domaine. Blend aims to highlight the harmony of Chinon’s terroirs • A cold maceration begins a fast fermentation at warmer temperatures, lasting for ten days • Malolactic fermentation takes place in cuve over the course of the winter months • After several rackings, the wine ages in cuve and is then bottled


2018 El Enemigo Cabernet Franc...$26.99
The elegant, spicy, peppery and floral 2018 Cabernet Franc contains 10% Malbec, as these varietal bottling are rarely 100% varietal. It has intense and pungent flavors reminiscent of freshly cracked black peppercorns and wild herbs. The ripeness is contained, and the wine has a surprisingly low pH that provides very good freshness and a vibrant palate, more so given the very fine tannins and the tasty flavors that lift up the finish. Superb Cabernet Franc at an unbeatable price. 26,000 bottles produced. It was bottled in July 2019 after 15 months in centenary oak foudres.
Rated 93+/100 The Wine Advocate
Rated 93/100 James Suckling
Rated 93/100 Vinous Media