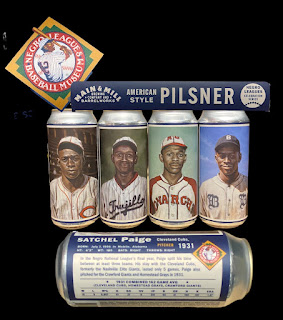 Satchel Paige Edition!
Main & Mill Brewing Negro Leagues Celebration Series 001 Pilsner...$11.99 / 4pk 16oz cans
The first release will feature Satchel Paige with four unique paintings on the cans celebrating Paige's 50th Anniversary of his Hall of Fame election from 2021. Each label is numbered as part of a nod to the nostalgia of baseball card collecting.

Main & Mill is donating over 20% of the sales directly to the promotion of the league, the history behind the league and the players while sending checks to the families of the players themselves.
Posted by Paul Hayden at 1:00 PM