Barrell Batch #29 was one of the highest scoring Whiskys in the 2021 Whisky Advocate buying guide!

The highest score any Barrell Bourbon has received so far! 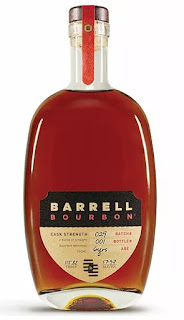 Barrell Bourbon Batch 029 Cask Strength...$74.99
Initially soft and reticent on the nose, with water revealing the sweet maltiness of a vanilla shake, as well as buttered toast, almonds, and melon. A smooth creamy palate shows honey, blueberry pie, and vanilla ice cream. Baking spice and more pie notes emerge, along with toasted walnuts, bitter coffee, chocolate, and a finish of cinnamon-sprinkled vanilla custard and baking spice. A hot one, even with water, but loaded with well-integrated flavors.
Rated 94/100 The Whisky Advocate
The base of Barrell Bourbon Batch 029 is an herbal and viscous blend of Indiana bourbons. The blend was expanded with 6 and 7-year-old rye-grain Kentucky bourbon, chosen for its exotic cinnamon spice note and floral 9 and 10-year-old wheated bourbon. Finally, a small amount of 6, 14, and 16-year-old Tennessee bourbon was added for a fruity nose and a long, oxidative finish.