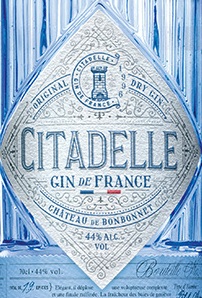 Compare to $24.99 for a 750ml at Total Wine and More
The 19 aromatics that make up Citadelle are infused, according to their profile, between one and four days – a crucial time so that Citadelle can acquire its distinguished profile. It is then distilled in small copper stills over open flames in order to develop its suppleness and voluptuous character in the mouth.

Citadelle Gin exudes delicate aromas of fresh flowers highlighted by more assertive citric scents. Once served, it emanates more intense, herbaceous notes of juniper and anise; then, the spicy cinnamon side softens the nose, bringing a very gourmand dimension to the gin. On the palate, the juniper cedes to a long, voluptuous, spicy fragrance.

But while Citadelle offers complete aromatic richness, its three character traits remain:
– Juniper, its signature, the key base of Citadelle
– Citrus, the complementary note that underlines the juniper
– Exotic, offering an additional level of enjoyment with touches of pepper, nutmeg and cinnamon.

Beautifully balanced, it is elegant, soft and and long in the mouth, with an alcohol content of 44%. A perfect equilibrium between intensity and finesse.

Citadelle has won more than 60 medals, among them “Spirit of the Year” at the 2017 World Spirit Awards as well as “World’s Best Gin” and “Gin Grand Master” in London. Its bottle hasn’t escaped attention either; it was awarded a gold medal at the Spirits Design Master 2017.
Posted by Paul Hayden at 8:28 AM