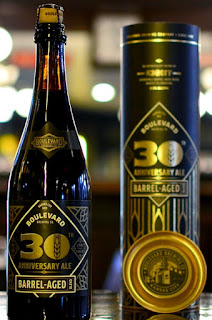 No longer online,
just a bottle or two left at Forsyth
Boulevard 30th Anniversary Barrel Aged Blend...$17.99 / 750ml
30TH ANNIVERSARY ALE
BARREL-AGED BLEND
Inspired by John’s desire to “do something different,” our brewers created this elegant, complex blend of barrel-aged beers to celebrate our 30th anniversary. Thank you to our fans for being a part of it all – cheers to 30 years!


Recommended Glassware: Tulip Glass
Posted by Paul Hayden at 8:51 AM