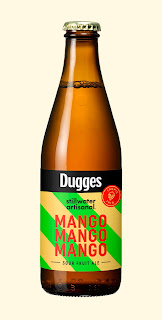 Dugges / Stillwater Mango Mango Mango...$5.99 / 11.2oz
Sour Fruit Ale
It might sound like an echo, but it’s not. This collaboration with Stillwater Artisanal explores the true depth of Mango flavor. Three layers of taste and aroma from fruit and hops. Go Mango!
Story text:  If you’re going to put fruit in a beer, there’s no better fruit to use then mango. At least that’s what Magnus here at Dugges Bryggeri says. So, when there was time for another Dugges x Stillwater Artisanal collaboration, Magnus posed the idea of a mango beer to Brian of Stillwater. Turns out, Brian had the same idea about mango and beer as Magnus. So, we set out to do a mango solo! To make it a sour was a no-brainer. We’ve got nothing but love for our sour collaborations so far, and we wanted to continue exploring that. Said and done, with mango flavor from two types of mango fruit and from mosaic hops we did it. Mango, mango, mango! 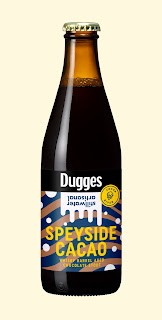 Dugges / Stillwater Speyside Cacao....$9.99 / 11.2oz
Whisky Barrel Aged Chocolate Stout brewed with Cacoa, coconut, and Vanilla
Together with Stillwater Artisanal we made a beer inspired by everyone’s favorite candy. We made a chocolate bar in a bottle. Then, we aged that beer in Speyside whisky barrels. Absolutely divine!
Story text:  Sometimes beers happen from coincidence, or in this case coincidences. In October of 2016 we we’re up in Aberdeen to brew with Fierce Beer. Thanks to that visit we got in touch with a company that sells really freshly emptied whisky barrels. We ordered 10 Speyside barrels, almost on a whim. Had no real plans on what to put in them once they arrived. Then, in April of 2017, we had Brian Strumke of Stillwater Artisanal here at the brewery, together brewing what turned out to be our seventh (!) collaboration, Cocoa Cacao - an imperial chocolate stout. Just days before that beer was done the Speyside barrels arrived, and there we had it. Honestly, what better beer to pour in Speyside whisky barrels then a decadent imperial chocolate stout? Coincidental yet perfectly logical. Like life…. kinda.
Posted by Paul Hayden at 6:44 AM