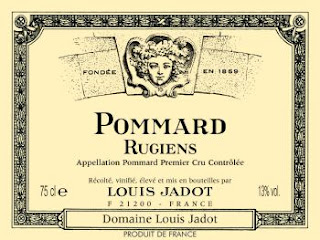 
2016 Jadot Chambertin Clos de Beze Grand Cru...$439.99
(Jadot made 85% of a normal yield here): Bright, full red. Very ripe, almost liqueur-like aromas of cherry and raspberry enlivened by rose petal, menthol and crushed stone. Compellingly rich and dense but light on its feet; even richer and riper than the Chapelle but still with terrific inner-mouth energy and juicy definition. The intense red berry flavors are complicated by an exotic spicy/herbal element of za'atar. Even more backward than the Chapelle but the tannins are wonderfully refined and the raspberry and spice finish at least as long. (Jadot also has a single purchased barrel of Chambertin, but the wine was too reduced and leathery to assess--not to mention chunky and a bit aggressive following a very late malo.)
Rated 94-96/100 Stephen Tanzer
Rated 94-96/100 The Wine Advocate
Rated 93-95/100 Burghound

2016 Jadot Volnay Santenots....$85.99
Medium red. Sexy fruit cocktail notes of raspberry and pomegranate are complicated by savory minerality and a whiff of coffee. Nicely ripe and pliant, with its red fruit and spice flavors conveying a relaxed quality despite the fact that 40% of the crop was lost. This rather suave wine finishes with a touch of menthol, ripe tannins and attractive floral persistence. This fruit was picked early, on September 22, but the grower did a very good job sorting, noted Barnier. As Jadot purchased the sizable Domaine Prieur-Brunet last summer, there will be a separate domain bottling of Santenots beginning with the '17, but this négociant version will continue to be made. (My sample of the Volnay en l'Ormeau, a site hard hit by frost, was a bit oxidative as well as quite tannic, and impossible to assess.)
Rated 89-91/100 Stephen Tanzer
Rated 89-92/100 Burghound

2016 Jadot Corton Pougets Grand Cru...$122.99
The 2016 Corton Pougets Grand Cru has an earthy, cedar-tinged bouquet that has personality and is nicely defined with good vigor. The palate is well defined with juicy, ripe red cherry and boysenberry fruit, impressive focus with a more introverted finish that will hopefully come out of its shell once in bottle. This is one to watch.
Rated 92-94/100 The Wine Advocate
Rated 91-93/100 Stephen Tanzer
Rated 91-93/100 Burghound

2016 Jadot Chassagne Montrachet Abbaye de Morgeot...$97.99
Bright, pale yellow. Pear and white flowers are complicated by a note of marzipan on the nose. Suave, juicy and light on its feet, with sharply focused lemon and floral flavors lifted by harmonious acidity. This energetic, very precise wine is most impressive today on the rising, slowly mounting back end. This wine from a relatively cool site was a sentimental favorite of mine at Jadot for its floral character and class. The yield was two-thirds of normal in 2016, according to Frédéric Barnier.
Rated 91/100 Stephen Tanzer
The 2016 Chassagne-Montrachet 1er Cru Abbaye de Morgeot has a rather conservative yet well-defined bouquet with light wet stone scents percolating through the citrus fruit. The palate is well balanced with a fine line of acidity. The new oak is more pronounced here than the other Chassagnes but that will be subsumed with time. Good potential here.
Rated 89-92/100 The Wine Advocate