In stock at Forsyth 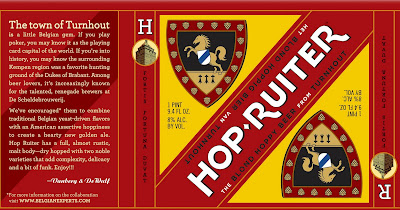 This 8% ABV bottle-conditioned strong golden ale combines Belgian appreciation for aromatic esters with the American love of hops. The balanced blend of the two is being simultaneously launched in the US and the Low Countries. Based on early response we think it is going to be a Belgo-American classic.

As always our sympathies at Vanberg & DeWulf are clear. We are on the side of the independent and passionate small producers. Beer consumption in Belgium is on the decline, so we know that creating a robust export market helps to insure that the Belgian brewing scene remains vibrant in years to come.

Here is the story of how our first “cooperation beer” project came about:

In the summer of 2009, thanks to the intercession of a friend in the Belgian beer expert pantheon, Don Feinberg (the original importer of beers such as Duvel, Rodenbach, Affligem, Blanche des Bruges and Boon and the founder of Brewery Ommegang) was made aware of a promising small brewery in the Kempen region near the Dutch border. He paid the Schelde Brouwerij a visit. The brewer, Pieter van den Eijnden, and managing director, Gust Hermans, sat down with Don to taste their excellent beers. A plan was hatched to cooperate on simultaneously launching a proprietary new beer – one that would pay homage to the raucous aromatic strong beers that Don remembered from his early days in Belgium in the late 1970’s. - but that would add a forward hoppiness so favored in America and increasingly appreciated in Belgium.

Over the course of the winter 2009, and spring 2010 various test brews were conducted and the graphics for the label were developed. Test batch results (express mailed to us) were tasted in our Chicago kitchen. We shared the prototype beers with friends in the business. One among them was unanimously declared to be superior – and selected as Hop Ruiter.

The first shipment of 750ml bottles has arrived. 20 liter kegs will follow soon. The beer is already selling on draft in Belgium and Holland and has become the brewery teams’ favorite beer.

While the Schelde Brouwerij is resolutely modern- Hop Ruiter’s graphic imagery (both heraldic and reminiscent of a deck of playing cards) references the history of the provincial seat of Turnhout. The fens and marshes surrounding Turnhout were the favorite hunting grounds of the Dukes of Burgundy (12th to 16th C). Their love of art, industry and good living still imbues life in the Kempen region. In the 19th century Turnhout became the center of the Belgian paper industry. This is where the production of playing cards took hold. Turnhout is the playing card capital of the world. It hosts The Museum of the Playing Card and is headquarters to Carta Mundi. This 100% Belgian-owned company (formed from a consortium of former competitors) produces more than two hundred million decks of playing cards per year.

We suggest you enjoy Hop Ruiter as an aperitif -- or over a game of cards. Given the hunting history of the region - you'll find it a fine companion to game birds, venison and hare. We like to offer Hop Ruiter at Belgian brunches - with egg dishes, sausages, baked beans, croques monsieurs, and grilled tomatoes & asparagus.
info from importer

Don't drink alcohol but sure would love to know where I could buy some of this beer to hand out as gifts. With a name like that it must be some good beer.