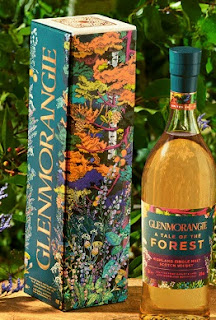 Glenmorangie Tales of the Forest Single Malt...$94.99
Limited release
Lush and invitingly herbaceous, Glenmorangie A Tale of the Forest is Glenmorangie’s first whisky crafted from barley kilned with woodland botanicals.
Inspired by the ever changing natural wonder he encounters while wandering in the forest near his home, Glenmorangie’s Director of Whisky Creation, Dr Bill Lumsden, brought back an ancient method of kilning barley with botanicals. In this case, he chose juniper berries, birch bark and heather flowers.
Evoking the scents, sounds and sights of the forest, the single malt surrounds your senses with aromas of pine, juniper and coriander, laced with wisps of smoke. Then tastes of deep-green eucalyptus, lit by rays of bitter orange, drift to a slow, gently oaky finish.
The whisky’s fragrant, wooded depths have inspired illustrator Pomme Chan to dream up her own fantastical forest. Celebrating the whisky’s flavours, her artwork is showcased on the whisky’s pack.