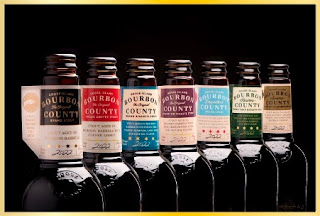 Goose Island Bourbon County Coffee Stout
In 2010, we released the first-ever Bourbon County Stout variants and our Goose Island Bourbon County Coffee Stout has been a fan favorite ever since. For the first time since 2017, we brought back a coffee variant this year in partnership with our friends and neighbors Intelligentsia Coffee. Intelligentsia relies on Burundi for some of the cleanest, sweetest coffees in the world that ultimately complement the quality and tasting notes of Bourbon County Stout. The specific coffee blend combined with our Imperial Stout is called Turihamwe, which means “together”, and is a perfect tribute to all the hands that go into making it – from the female coffee farmers in Burundi that produced the blend, to our friends at Intelligentsia, the first brand we worked with on a variant back in 2010. The result of this “togetherness” is another exceptional coffee variant featuring rich chocolate, coffee, and caramel flavors that will appeal to coffee drinkers and beer lovers alike.

Goose Island Bourbon County Biscotti Stout
At Goose Island, we believe ideas and inspiration can come from anyone in the Goose family, and our Biscotti Stout is a perfect example that came from our very own HR team. Inspired by the Italian desserts of her childhood, Jill Cerone, People Manager at Goose Island, dreamed up this variant after grabbing a box of chocolate-dipped biscotti from her cabinet. Working with the brewing team, Jill brought the flavor to life with notes of anise, marzipan, cocoa, and buttered toffee. The biscotti enhances flavors already found in our Bourbon County Stout and adds strong notes of nostalgia from your Italian grandma’s kitchen. One sip and you’ll be reminded of pizzelle cookies, Easter Pane di Pasqua and, of course, almond biscotti.

Goose Island Bourbon County Sir Isaac’s Stout
For years, brewers at Goose Island have brainstormed ways to incorporate figs in Bourbon County Stout, but faced a daunting task due to their subtle flavor. After fresh thinking from members of the Goose Island E-commerce team, Melissa Alleguez and Ryan Hubona crafted a recipe inspired by Melissa’s childhood memories of stealing fig cookies out of her grandma’s cookie jar during her summers on Lake Michigan. And thus, the fig cookie and graham cracker-inspired Sir Isaac’s Stout was created. Highlighting the dried fried profiles extracted from the bourbon in the barrels, our brewers used Black Mission figs (10,000 pounds of them, to be specific) to create this variant resulting in characteristics of dried fruit, honey, molasses, and citrus, all reminiscent of the classic fig cookie sold on shelves today.

Goose Island Bourbon County 30th Anniversary Reserve Stout
Aged in Bookers, Knob Creek, Basil Hayden and Baker's barrels
We created a special 30th Anniversary Stout to pay homage to the serendipitous union between Gregory Hall and Booker Noe that then led to subsequent years, variants, and traditions - from Black Friday lines to bottle shares and more. Going back to the inception of Bourbon County Stout, the 30th Anniversary Stout is aged from a blend of Jim Beam barrels from their Small Batch Bourbon Collection barrels. Each of the remarkable bourbon barrels offer characteristics unique to each bourbon's distinct nuances. They are then blended together for a complex and balanced expression that celebrates the heritage and legacy of both brands. And, as history would have it, Jim Beam launched their first-ever Small Batch Bourbon Collection 30 years ago. This 30th Anniversary Reserve Stout is a culmination signifying the historical, groundbreaking shifts in both the bourbon and beer industries from two visionaries all those years ago. Both the concept of small batch bourbons and bourbon barrel-aged beers have changed our respective drinking communities forever, and the 30th Anniversary Stout is a celebration of all the people that have enjoyed, worked on, and been a part of the Bourbon County Stout brand over the years. Expect notes of dark chocolate, vanilla, cherry, and almond. We’re excited to raise a glass to this extraordinary 30-year-old history and craftsmanship.
This one is sold out
We only received 12 bottles of this one - it was released through the BRC ONLY
Goose Island Bourbon County Two-Year Barleywine Reserve - Old Fitzgerald
For this Reserve, we worked with our friends at Old Fitzgerald to obtain three exceptional sets of barrels of varying ages from the distillery's Old Fitzgerald’s Bottled-In-Bond Decanter Series. This Reserve offers us a rare opportunity to highlight the distinct characteristics of our rich Barleywine aged in 14-year, 16-year and 17-year-old barrels of an amazing bourbon pedigree. Bringing back our classic English-style Barleywine for the first time since 2018, we knew this was going to be something special. Our Two-Year Barleywine Reserve evokes the rich intricacies from that of Old Fitzgerald’s Bottled-In-Bond Series for a velvety taste of rich malt, entwined with notes of toffee, cherry, vanilla, fig, and almond.
How it started!
In 1992, former Goose Island brewmaster Gregory Hall wanted to brew something truly unique for the brewpub’s 1,000th batch, he just needed some inspiration. Then a chance encounter between Greg and Jim Beam’s Booker Noe led to Goose Island acquiring the barrels for what was to become the world’s first bourbon barrel-aged beer, Bourbon County Stout.

Today, Bourbon County Stout is not only a local favorite but globally known for setting the standard of barrel-aged stouts with continued innovation. This year, we commemorate the 30th Anniversary of the extraordinary Bourbon County Stout history with a lineup sure to excite new and diehard fans alike.
Posted by Paul Hayden at 7:27 PM