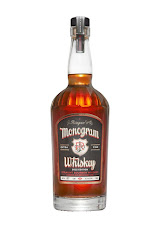 Limited release! One that usually goes in the raffle, but we got extra!
Rieger Monogram Bourbon Whiskey 2022 Edition...$129.99
Rieger’s 2022 MONOGRAM WHISKEY once again showcases the rare and unique flavors from the gorgeous Oloroso Sherry Botas of our Whiskey Solera. Since 2017, Rieger’s Monogram Whiskey has been created using four nearly century-old 500-liter barrels (referred to in Spain as “botas”) that were removed from the actual solera of the Williams & Humbert Drysack 15-year Oloroso Especial and shipped to our distillery in Kansas City. For this year’s release, we chose to utilize just 5 of these 10 casks, all filled with Bourbon, marking the first time that our Monogram bottling will be a Straight Bourbon Whiskey.
Posted by Paul Hayden at 1:02 PM