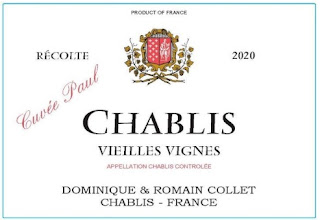 We found an amazing new Chablis producer, we loved them so much we bought all that came into St. Louis!
2020 Dominique & Romain Collet Chablis Cuvee Paul....$34.99
Having had the privilege and honor to work with and champion the Famille Collet since 1995, we are pleased to debut the old vine Chablis "Cuvée Paul" 2020 to the U.S. Paul is Romain's son, so yes, at some point Paul Collet will be on a label, but for now this very special assemblage is from vines owned by Dominique Collet, Romain's mother. Dominique's family has tended these vines since their planting in 1932...that is no typo, 1932. Ninety years of history, magnificient exposure, massal selection, complete hand harvest, 100% native yeast and raised in INOX tanks. The 2020 was bottled for the U.S. in January of 2022...again no typo, 2022. This is classic, old-school Chablis, full of fresh fruit and completely free of the influence of wood barrel. Look for citrus notes in the nose along with oysters shells and ocean spray. The palate is long, stony and dry, with chiseled minerality and backbone à la chablisienne. Bravo Dominique, Romain and Paul!


Premier and Grand Cru Chablis at stunning prices!
2020 Dominique & Romain Collet Chablis Montmains 1er Cru....$42.99
2020 Dominique & Romain Collet Chablis Vaillons 1er Cru....$42.99
2020 Dominique & Romain Collet Chablis Les Clos Grand Cru....$89.99
Romain has grown up with these vineyards; he is like a human compass for these vines. In 2008 Romain took over winemaking for Domaine Collet after his father suffered a stroke; one year later he started his own Domaine, Romain Collet. His inaugural vintage was 2009, and he was only 23.  With his own wines, he could experiment with natural yeasts in the cellar, and was immediately taken with the results, wines of complexity, of nuance and a seamless pop of tension. He is, he’d tell you, an adherent of harmony: If there’s one thing he hates, it is wines that feel disjointed, jumbled, broken.  Today, most of Romain’s parcels are certified organic by France’s Bureau Veritas; by the end of 2020 that figure will be 100%.
Are these “natural” wines? Collet applies is a small addition of sulfur during fermentation and at the bottling stage, so no, not completely. Are these some of the most delicious wines? Hell Yeah!
Posted by Paul Hayden at 11:52 AM