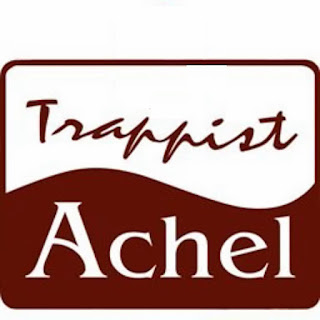 Achel 8° Blonde...$5.99 / 11.2oz
The nose of this refermented triple shows a very fine hoppyness, combined with sweet-malty and floral notes. In the mouth, the taste lives up to all the promises of the fragrance: after a sweet start, the flowers and hops appear; the full taste is followed by a long finish, in which the bitterness is tempered by velvety malt notes.

Achel 8° Bruin...$$5.99 / 11.2oz
A slightly sweet note stands out in the nose - the alcohol (8 vol.% Alc) is not strange - but this strong beer still comes across as fresh. The taste is full-bodied and pungent on the tongue. Slightly sweet (but not sticky), a hint of ripe fruit, but especially coffee bitters determine the character of this beer. The long finish is also dominated by this bitterness.


Achel no longer a Trappist beer, after last monks depart abbey
After the last monks left Achel Abbey earlier this year, the beers produced at Achel Brewery no longer bear the Trappist label.

In the beginning of January, there were 14 authentic Trappist beer brands. By the end of the month, the Trappist Belgium breweries were reduced by one.

Eight of the Trappist breweries are located in Austria, the UK, Italy, Spain, France, the Netherlands, and the United States. The remaining breweries were in Belgium: Westmalle, Westvleteren, Orval, Rochefort, Chimay, and the former Achel, which is now closed.
The Trappists, or Cistercians of the Strict Observance, observe the Rule of St. Benedict.
Prior to 1998, breweries with no affiliation to the religious order were producing beers labeled Trappist. In response the International Trappist Association was established to preserve the name of abbey beers.
In order for a beer to claim itself as Trappist, the ITA requires the beer to be brewed in the confines of a monastery, under the direction of the monks, and the production is limited to the costs of monastic preservation, including their pastoral work and providing sustenance for the monks. Achel Abbey was founded as a priory in 1846, as a daughter house of Westmalle Abbey. It became an abbey in 1871. It was disestablished in 2021, with its last monks going to Westmalle Abbey.
Achel’s beers had already been brewed under the supervision of monks from Westmalle for some time.
The abbot of Westmalle told VRT, a Flemish public broadcaster, that “The beer is still brewed under our supervision, so feel free to still call it Trappist. But we are no longer allowed to use the logo, because there is no longer a living community present in Achel.”

“The beer itself will not change its taste and production will not be compromised,” he added. “On the contrary. We are currently investing in a new, larger brewhouse. It will be brought into use in the spring.”

Angelus
Posted by Paul Hayden at 7:24 AM