The art of brewing
Lower Bavarian brewcraft: For almost 500 years, Arcobräu has been brewed in Moos, at the very heart of lower Bavaria where the Danube and the Isar meet. Surrounded by rolling fields of barley and wheat with the dark hills of the Bavarian forest in the distance, the location is idyllic. 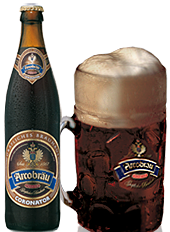 Arcobrau Coronator Doppelbock...$14.99 / 6pk
7.2% ABV
Our CORONATOR. An extra strong dark beer known as an old Bavarian Doppelbock which was historically brewed for Carneval and in Lent with a wort over 18%. Malty in flavour and smooth.

The Doppelbock is a true heart-warmer, who's literal meaning is “double beer”. It's one of Germany's biggest beers, and as the name might suggest, is a typically strong lager that contains so much malty goodness, it's often been referred to as 'a meal in a glass'.