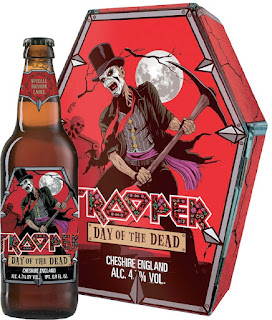 Iron Maiden Trooper Day of the Dead Coffin Pack...$13.99 / 2 pints of beer
Includes 2 - pints of Iron Maiden Day of the Dead Ale in a coffin box
TROOPER beer, which in May 2021 celebrated its 8th Birthday, has won multiple Gold medals at the prestigious British Bottlers’ Institute Awards, as well as picking up awards at the World Beer Awards, Global Beer Masters and International Beer Challenge. Since launching in 2013 TROOPER has sold 30 million pints in over 50 countries around the world representing a roaring success for Robinsons and IRON MAIDEN.

Mexico’s Dia de los Muertos (Day of the Dead) is celebrated annually and is a time for people to honour their ancestors and loved ones who have passed away and invite those spirits back into their homes to be part of the family once more. The practice goes back thousands of years in Latin American cultures.

Robinson’s TROOPER Brand Manager, Dean Etchells, said: “We are delighted to be bringing Trooper fans, the latest label version for our award-winning beer. This year’s label pays homage to IRON MAIDEN song The Reincarnation of Benjamin Breeg which features on Maiden’s 2006 Album, A Matter of Life and Death. The artwork is iconic and a really distinctive piece to add to our popular collection of limited edition labels for Trooper.” 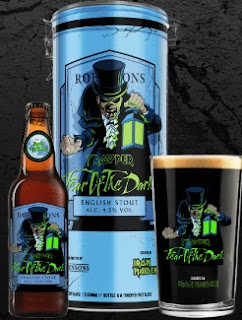 Iron Maiden Fear of the Dark English Stout Tin and Glass....$24.99 / set
Metal flip top tin, pint glass and a pint of beer!
IRON MAIDEN and Robinsons Brewery bring you FEAR OF THE DARK - a 4.5% ABV English dark roasted chocolate stout that is full bodied and rich in flavour.

Created by BRUCE DICKINSON and Robinsons' Head Brewer Martyn Weeks, FEAR OF THE DARK is the first stout in the TROOPER beer family and takes its name from IRON MAIDEN's iconic song and album of the same name
Posted by Paul Hayden at 9:40 PM