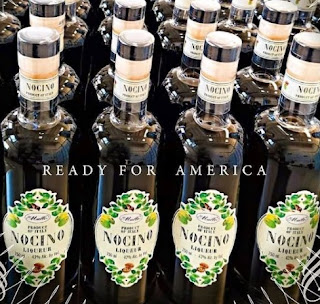 Il Mallo Nocino Walnut Liqueur...$45.99
A liqueur obtained from the maceration of the green husks of Junglas Regia walnuts in alcohol, following the traditional Modena recipe. The liqueur has a rich, full-bodied bouquet.
It’s perfect served straight, chilled or on the rocks. Versatile in mixed drinks and for cooking.

Il mallo (the husk) is where it all begins: the green walnut. Packed with aroma, essential oils, active principles and vitamins, a fleshy hull to be picked when still green.

Popular tradition dictates that for the preparation of Nocino, the walnuts are picked before they ripen, when their green husk is still soft enough to be cut with a knife. The best time is the week of St John, specifically the night of 23 June, traditionally the moment for harvesting the green walnuts, which are at the perfect stage for infusing.

And this is the moment we can point to one of the common denominators in the Modena tradition; a custom that encompasses the entire production cycle of preparation, maturing and sharing. It’s a cycle that’s linked to the women of the region, the home owners (rezdòre), who would climb ladders – barefoot, to avoid slipping – into the walnut trees to harvest the best nuts, and then lay them on jute sacks on the ground to be covered by the dew. Then they prepared the infusion, which was left to rest until Christmas, when the Nocino was made, ensuring that there was always something to offer for life’s unexpected moments.

Today Il Mallo continues to respect the ancient art of preparing Modenese Nocino: the meticulous selection of the green walnuts, picked at just the right time; their cutting and maceration in agricultural alcohol; the tapping and pressing; the infusion left to rest in vats. The recipe we follow has remained unchanged for many years: an infusion of walnut husks, water, sugar, alcohol and spices (cinnamon, cloves and coriander seeds).

This is a liqueur whose roots lie in the distant past, but which has always been in step with the times. Its strong character makes it unique yet versatile; its velvet-smooth flavour is warming when drunk on its own, but can also be mixed or used in cooking.
Posted by Paul Hayden at 9:57 AM