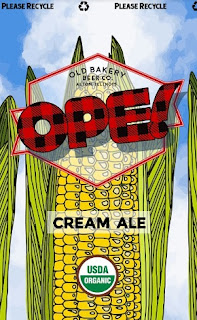 Ope!  You don't want to let this one sneak by you!  Our light and crisp cream ale features organic flaked corn from Cow Creek Farm in Paxton, IL.


WHAT THE HELL IS A CREAM ALE?
You might get the impression that we, the beer gurus of ACB, understand all there is to know about beer, yet we’re still learning, just like anybody else. And it’s this thirst for knowledge that drives us to dig deeper into the stories behind the beers we drink, thus protecting you from the embarrassment of not knowing what exactly it is you’ve decided to pour in your mouth.

As the days and blades of grass grow longer, so too grows our need to stay hydrated whilst pushing heavy machines across the yard. Yet having a beer called a Cream Ale doesn’t exactly sound like the best option to satisfy that thirst. Or does it?

Good thing you’ve tuned into the latest episode of our ongoing series (drum roll please…) “What the Hell Is a Cream Ale?”

The Basics:
With the huge influx of German immigrants in the late 19th century, the popularity of lager and pilsner styles exploded, especially throughout mid-America. Due to generally colder temps and local preference, Northeastern brewers were predominantly ale brewers, so they hatched a strategy to keep up.

Prior to prohibition many NE brewers brewed a light bodied ale known as a “present use” ale (it was not made to sit on the shelf), which is effectively what a Cream Ale is: a cold fermented ale. Much like the cold-fermented kölsch ale brewed in Cologne, Germany, the top fermenting Cream Ale is light bodied, has fewer fruity esters and neither malt nor hops prevail.

Though a cream ale differs from the kölsch in one major way: the addition of rice and/or corn adjuncts to lighten the body. Historically, the dominant cream ales of the Northeast have been Narragansett from Rhode Island and Genesee from Rochester, NY, yet since prohibition they’re brewed nationwide with Rainier, Olympia, Old Style and even Natural Ice technically fitting the definition.

So, if you bought a cream ale in the hopes that it would be creamy or maybe even a dark malted beer, you’re probably not the first or last to do so. We get this disappointment, yet as we speak, those brewing cream ales are changing the style as we know it.