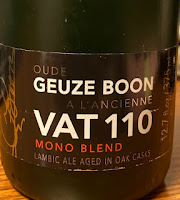 Brewed on 4/16/2014 and bottled on 12/15/2016
Vat 110 is characterized by its richness in aromas originating from the brett yeasts present in the foeder.  It is a slightly dry, yet full-bodied traditional Oude Geuze with hints of vanilla and dried fruit. 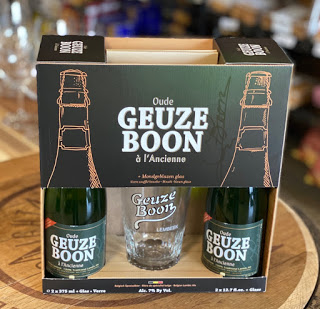 
2 bottles and a Boon glass!
Oude Geuze Boon is one of the finest examples of the traditional 100% spontaneous fermentation Lambic style. To moderate the sourness, Boon Brewery only brews Lambic in the 7 cold months, from early October until April, according to the traditional “turbid mash” system. 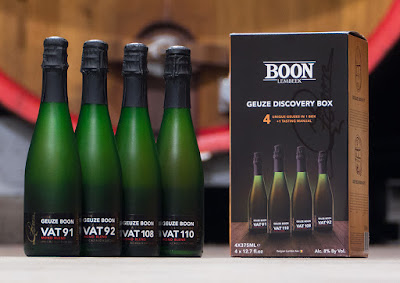 
As the name suggests, the Geuze Discovery Box is a box that lets you discover several new geuze beers. The box contains four new Oude Geuze Boon ‘VAT’ beers, each matured in its own particular oak barrel at the Boon Brewery reserve. In the cellars of Boon Brewery today, there are 158 giant oak barrels known as “foeders”, each containing up to 27,000 liters of lambic beer. Visitors to the Brewery sometimes ask whether they can taste the beer in the barrels and whether the beer from a particular barrel can be bought in shops. In the past, this wasn’t possible because Oude Geuze

Boon normally consists of a mixture of lambic from several different barrels. “But then we thought about it and, in 2013, we brought the very first Oude Geuze Boon VAT 44 to market,” explained Frank Boon, founder of the brewery. “This was a small production of Oude Geuze made up of 90% lambic from a single barrel, foeder number 44. The remaining 10% was a young lambic which contained the sugars for the bottle conditioning.” “The oak barrels in our brewery each have their own history and are characterised by unique microflora of wild yeast. The use of lambic from a particular oak barrel creates geuzes with very distinctive characteristics: vinous, whiskey-like, bone dry or very soft. The number on the bottle always indicates the vat number”, explains the eldest son, Jos Boon. Discover Four Different Oak Foeders Since 2013, the brewery has made four Oude Geuze Boon ‘VAT’ beers. But now, for the first time, four different VAT Geuzes are brought onto the market together at the same time in the ‘Geuze Discovery Box.’ In this convenient box, you’ll find Oude Geuze Boon VAT 91, VAT 92, VAT 108 and VAT 110. These are 37.5 cl bottles. The ability to taste four different VAT numbers at the same time is really a fascinating experience. The Geuze Discovery Box also comes with a booklet which contains more information about the Geuze production process and the various foeders. This booklet also contains tips on the art of Geuze pouring and tasting. It’s perfect for beer tastings, or as a gift.
Posted by Paul Hayden at 9:31 AM