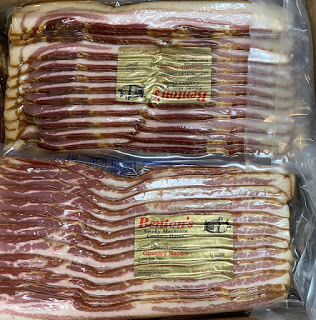 This bacon is smoked the old fashioned way for two days.

"Our hickory smoked country bacon is equally at home on a bacon, lettuce, and vine ripe tomato sandwich or on the breakfast table as it is wrapped around a premier cut of beef or a fish fillet. Hickory smoked in our smokehouse using an old-fashioned wood stove, each slice of our bacon has a distinctive full flavor that has attracted and maintained a broad spectrum of customers, from those looking for smoked bacon “the way grandpa made it” to gourmet chefs with the most distinguishing of tastes." -- Bentons

Their bacon has been featured in Gourmet Magazine, Saveur Magazine, and Southern Living Magazine.
Their bacon has been featured in Gourmet Magazine, Saveur Magazine
and here is an excerpt from Southern Living Magazine. "This is, hands down, the best bacon I've ever tasted....Benton's Smoky Mountain Hams come from a much closer source: Madisonville, Tennessee. You don't have to take my word for it though. Just ask the farmers and chefs. Some of the nation's top culinary stars make magic with Benton's hams. Local farmers bring their personal hocks to be cured by the five-man shop that competes with industry giants. The secret? They do things the slow way—using meat-curing practices thousands of years old. "Everything is done by hand," says Allan Benton, who speaks about curing ham with a passion that other men reserve for sports. Until recently, he kept his clients' addresses on yellowed sticky notes taped to the wall. "We're a hillbilly operation through and through," Allan says. And wonderfully so. The transformation from pork to perfection takes place in a smoke-stained cinder-block building on the side of a Tennessee byway. In a traditional process that's never rushed, whole hams get slathered with salt, sugar, and the family's secret spices; then they cure—for 7 to 14 months—on wooden racks. Out back, where the scent of smoking meat hangs thick in the air, Allan opens a sooty door to reveal the mysteries behind his bacon. As the fresh air clears out the little room, a tiny potbelly stove appears. "This is my smoke generator," Allan says. "I bought it for $50 from a cousin." Order now, because publicity has driven demand for Benton's products, especially the smoked bacon. Allan loves telling the story of a Vegas casino that paid hundreds of dollars for an emergency overnight shipment. But then, who knows better than a casino how to bring home the bacon?" -- Southern Living Magazine, November 2007
Posted by Paul Hayden at 3:07 PM