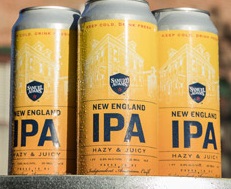 The slight sweetness is perfectly balanced by the pineapple and grapefruit hop character, without being overly bitter. Clocking in at 6.8% ABV and a low 35 IBUs, the unfiltered IPA provides a burst of fruited hop aroma and leaves drinkers wanting another sip. In comparison to West Coast style IPAs which have prominent hop bitterness and a light, dry mouthfeel, New England IPA’s are generally known for a juicy, luscious mouthfeel and opaque, hazy appearance - and are best enjoyed fresh.
Posted by Paul Hayden at 11:30 AM