TWCP feature in the Ladue News!

Check out this article about TWCP family in the Ladue News! 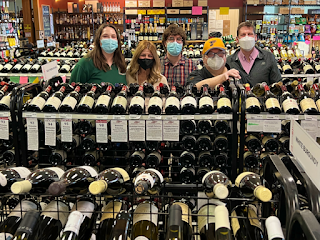 Cheers! Sláinte! Za zdorovie!
No matter how they phrase it, area connoisseurs of bibulous bliss may well drink a toast in 2022 to The Wine & Cheese Place, which is turning 40.

When TWCP opened in 1982, three metro area barflies sitting elbow to elbow to elbow potentially were sipping a lime-wedged Corona (introduced to the U.S. three years before), a glass of white zinfandel (just entering its heyday in the ’80s) and a sloe gin fizz (about which, the less said, the better).

Times certainly have changed, as Vijay Shroff likely would attest. Shroff assumed ownership of TWCP less than a year before the arrival of COVID-19 – a circumstance seemingly designed to transform a teetotaler into a tippler.

To misquote a proverbial phrase, though, when life gives you lemons, make limoncello – and Shroff, in his debut as owner, seems to have done just that. “The first two-plus years have been a fulfilling whirlwind,” he says. “The company could not have prospered during the challenges of the past two years without the amazing group of employees I am lucky to work with.

“Of all the things we’ve accomplished together, I am most proud of opening our two new stores – [Town and Country’s] Lamp & Lantern Village and Kirkwood – which have elevated our game to the next level.” TWCP also operates in Clayton and Creve Coeur.

Shroff says he is humbled, personally, to be stewarding such a local retail institution as it celebrates its 40th year in business: “It’s an honor to shepherd a beloved brand while updating it to keep us on top for the next decade and beyond. It’s extreme fun to take a great concept and tremendous group of employees and aim for new heights.”

As part of TWCP’s ruby anniversary, Shroff gleefully reveals a “teaser” for the year: “We’ve been keeping this mostly under wraps. In spring 2022, we’re opening our fifth location in [St. Louis’] South Hampton neighborhood. We are proud to finally have a store in St. Louis city!

“The concept will be focused on whiskey, wine and craft beer, with a good number of other spirits and food items. We’re calling it Spirit Wine & Craft, and our plan is to expand into other St. Louis areas under this new concept. Spirit will provide a similar shopping experience as our existing The Wine & Cheese Place stores, but with a smaller footprint and a focus on being the best bottle shop in the neighborhoods we serve.”

In light of his reference to Spirit being a “bottle shop” – a retailer that specializes in selling beer by the bottle or can for on-premises enjoyment, in addition to selling it (and other libations) to go – Shroff explains what new offerings at TWCP have most impressed him personally during his stint as head honcho there.

“We’re known for our long and close relationships with many craft brewers in town, and our beer collaborations with them generate much excitement,” he notes. “For years, we’ve had a special release – Merci – from [Maplewood’s] Side Project Brewing that’s made as a thank-you to Paul Hayden, our general manager.

“TWCP is the only place outside the brewery to sell Side Project beers and promote them. It’s a truly special relationship with a world-class brewer – ranked the second-best brewery in the world according to the international beer site RateBeer.com

Shroff continues with brio regarding “some very special local collab beers coming in 2022 for our anniversary.”

First he mentions “an exciting 40th-anniversary collab with 2nd Shift and Perennial – two of the best local breweries – of a barrel-aged barleywine,” a higher-octane style of beer. “We supplied five whiskey barrels from our store pick barrels,” Shroff says, “and they’re aging the beer inside of them – it’s been aging for about a year now.”

A prominent Florissant brewery likewise earns a mention from him: “We’re one of a very few retailers offered to sell Narrow Gauge beer – their double dry-hopped Fallen Flag was named best [India pale ale] in Missouri by VinePair.”

Last but scarcely least, Shroff cites the zymurgic pride of Festus, roughly 40 miles south of Ladue: “Another amazing local brewer, Main & Mill Brewing, is doing a 40th-anniversary beer for us this year – also aged in our own whiskey barrels.”

Finally, when asked where he’d like to see TWCP in a decade, when it turns 50, Shroff invokes his business’ day-to-day patrons, the discerning individuals who depend on him and his team for the finest in wine, spirits and beer.

“At 50, we hope to be serving more St. Louisans with additional locations, while still being the best shopping experience for our customers and, of course, maintaining the local focus that sets us apart from larger competition.”