This is the first Pulque we have seen in Missouri 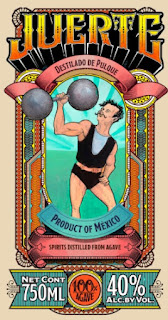 Juerte de Pulque Agave....$37.99
Product of Mexico
Distilled from Agave
Destilado de Pulque, also historically referred to as Mezcal de Pulque, dates back to the early days of the Spanish colonial era and of distilled spirits in Mexico. Pulque is the pre-Colonial agave-based drink that is made by fermenting the agave sap (known in Mexico as aguamiel)

Mention of Mezcal de Pulque in Diccionario Universal de Historia y de Geografia, 1855
There is not much historical writing on the early years of mezcal production or those of other agave spirits leaving some speculation and debate on the origins and possible earliest dates for destilados de pulque. Some claim it as an obvious precursor to mezcal as it would be logical for a creative and entrepreneurial alchemist to try to distill a fermented product with a high concentration of sugars such as pulque to see what the resultant spirit would be like. Others claim it came later as a way for producers to capitalize on pulque that is about to go over-ferment and go bad. Instead of throwing the product away, it would be returned to the haciendas pulqueras to be distilled and resold as destilado de pulque.

One thing all agree on is that the destilados de pulque went into obscurity with the decline of pulque itself in the early 20th century due to the rise and popularity of beer.

Gerónimo Rosainz, JUERTE’s master distiller, heard about destilados de pulque from his grandmother. She had told him stories about a French man who made destilado de pulque at his hacienda in their town. During the revolution, the French man, like most foreigners, fled Mexico back to his native country leaving behind his still. The locals were able to gain access to the abandoned hacienda and thus understand the process behind destilado de pulque production but, as this coincided with the downfall in pulque demand, no one took any initiative to continue its production.

Then, in the mid 1990s, Mr. Rosainz married a chemical engineer and told his new wife about the story his grandmother had told him. His wife helped him procure the necessary equipment and, together, they decided to reinitiate this centuries-old tradition and began selling their destilado de pulque in their village in northeast Tlaxcala.

Meanwhile, in Mexico City, as demand for mezcal began reaching a fevered pitch, Jorge Viveros and his friends had heard about destilados de pulque and were interested in making and selling their own. Having little experience in the area, they decided to search around to see if anybody else had the similar idea to revive this ancient spirit. This search eventually led them to the tiny state of Tlaxcala where they found Mr. Rosainz eventually forming the partnership that is now JUERTE.

Aguamiel – When the plant reaches maturity, a large hole is carved into the top of the piña. The plant’s natural reaction is to secrete its aguamiel (or agave sap). Once the aguamiel is removed, the inside of the hole is scraped with a metal scraper to agitate the plant into secreting more aguamiel. An agave can produce up to 10 liters of aguamiel per day.

Decanting – The person who does all the field work is called a tlachiquero which co mes from the Nahuatl word “to scrape.” The tlachiqueros use a tool called acocote to suck the aguamiel out from the agave. Originally, the acocote was a hollowed-out gourd but in modern times it’s made of wood or fiber glass.

Fermentation – Fermentation is often kicked off with the addition of pulque madre — pulque left over from a previous batch.The tinacal must be in an enclosed, cool place to ensure proper fermentation

Distillation – As the pulque ferments, portions are removed and distilled while a percentage remains in the vats to which fresh aguamiel is added. JUERTE Destilado de Pulque is distilled a single time in a stainless steel still. The heads are tossed and when the the distillate is at about 120 proof, it is kept. The tails of the distillate exit the still at about 50 proof.

The final product is mixed to obtain a resultant product at 80 proof which is rested for a few days before bottling.
Posted by Paul Hayden at 1:48 PM