We have a Double Feature tasting!! 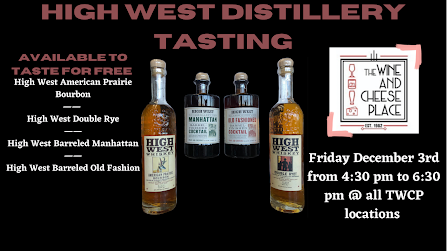 Join us this Friday from 4;30 to 6:30pm at ALL FOUR LOCATIONS as we taste from a classic American distillery, High West. Though founded just recently (2007), their bourbons, ryes, and blends are first rate, and their new premade cocktails are a must try for any cocktail fan!

High West Whiskey Double Rye! $28.99
Marriage of two straight rye whiskies that combines the feisty properties of a high rye 2-year-old and the saddle smooth richness of a 16-year-old. The 2-year-old has a 95% rye 5% barley malt mashbill. The older rye has a "barely legal" rye mashbill of 53% rye and 37% corn. The extra age and corn provides some extra sweetness to calm the "bite" of the younger rye for a relationship that works. High west 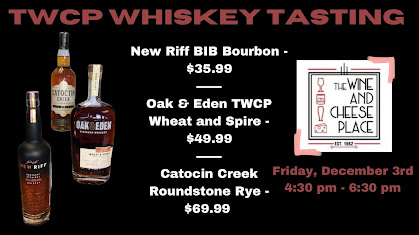 Join us this Friday December 3rd from 4:30pm to 6:30pm at ALL 4 LOCATIONS as we taste three of the whiskey world's best bang-for-your-buck including one of our hottest sellers, our own barrel pick from Oak & Eden!

New Riff is BIB 100pf (Bourbon) $35.99
New Riff Distilling’s core Bourbon expression is a genuinely high-rye, full bodied whiskey offering savory, spicy character. Building upon America’s 1897 Bottled-in-Bond Act—already the highest quality standard for aged spirits in the world—New Riff Bourbon is Bottled In Bond Without Chill Filtration. Featuring a mash bill of non-GMO grains at 65% corn,30% rye, and 5% malted barley, it represents a new riff on Kentucky’s most hallowed whiskey traditions. Aged four years in 53-gallon toasted and charred new oak barrels, there are no shortcuts taken in our production. All New Riff whiskeys are made with the full sour mash Kentucky Regimen; all carry an age statement, and are always bottled without chill filtration.


Oak & Eden TWCP Wheat &Spire $49.99
In a traditional bourbon, you’ll find a mash bill of corn, rye, and malted barley. Swap the rye with wheat, and a whole new world of flavors open up. With all the sweetness and creaminess traditionally found in bourbon, but with virtually no bite on the finish, Wheat & Spire is among the most pleasant and drinkable whiskeys in the Oak & Eden family. We then bring this whiskey to life with a fired French Oak spire, introducing new, silky botanicals coming naturally from the French Oak. -- TWCP

Catoctin Creek Roundstone Rye Cask 116 Proof $69.99
58% ABV
The best we make! Our most awarded whisky. This whisky has never received anything less than a gold medal!
The cask proof version of our ever-popular Roundstone Rye is a very special expression. Released at approximately 58% ABV (it varies depending on the individual barrels), this is seriously strong whisky! Delicious, dark, complex and ridiculously smooth for the proof, Roundstone Rye Cask Proof is released only about twice per year.
Posted by Paul Hayden at 2:42 PM