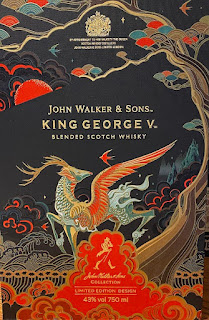 John Walker King George V Limited Edition...$599.99
Compare to $699.99 at Total Wine and More
In 1820, John Walker started out in business with a single small shop, but he always had big ambitions. Just over a century later, John Walker & Sons was awarded a Royal Warrant by King George V.

By then, Johnnie Walker was already well on its way to becoming the world’s most popular Scotch Whisky. Becoming a supplier to the Royal Household was an important step on that journey.

It is created using only the finest whiskies from distilleries that were operating during George’s twenty-five-year reign (1910 – 1936), some of which, like the famed Port Ellen, no longer exist. They are blended together to reflect the distinctive Johnnie Walker style of the era.
Posted by Paul Hayden at 1:18 PM