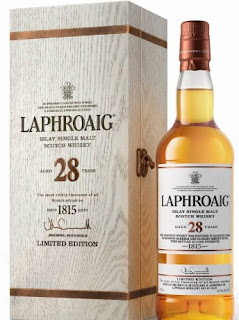 Limited release - at this point, nobody has it listed on Wine-Searcher yet
We have it in stock now!
Laphroaig Single Malt Scotch 28 Year Old Limited Edition...$699.99
44.4% ABV

Laphroaig 28-Year-Old Released, But Not 'The Oldest Expression To Date'
George Koutsakis
Contributor
The famed Islay distillery, renowned throughout the world whisky industry for its peat-forward, fruity expressions announced on Monday that it will be releasing one of it's oldest Scotch whiskies in the US, a Laphroaig 28-year-old single malt. Despite some recent news and many reports, however, this is not the 'oldest Laphroaig expression to date'. Just recently in 2015, the distillery released a 32-year-old expression, followed by a 30-year-old in 2016, and then a 27-year-old. The oldest official bottling by the distillery is 40 years old.

The new Laphroaig 28 Year-Old
LAPHROAIG
The new release was aged in a variety of casks for 27 years before the vintages were blended and inserted into sherry casks for an additional 12 months. The new release will launch for $799, available nationwide. At 44% ABV, the distillery mentions notes of sweet Manuka honey, dried fruit, and liquorice which are balanced out with the well-known Islay notes of leather, thyme and rosemary. Toffee, burnt wood, umami, dried spice, and cedar. The dram is bound to be an unforgettable experience.

The price is very reasonable for such a monumental expression, especially since August saw the Laphroaig 1967 15-Year-Old Sherrywood sell at auction for $79,000. Sure, it was a bottle from the late, famed bottler, Silvano Samaroli, but seeing as this is one of the oldest expressions ever released by Laphroaig it is expected to be an instant favourite for whisky collectors. The 32-year-old released in 2015 for the distillery's 200th anniversary was the oldest whisky to be released by the distillery in 8 years. Older releases came before that. Suffice to say, the secondary market will spike with flippers selling the bottle. Double, even triple the retail price online will not be surprising to see.
The Laphroaig distillery is one of the most iconic on the Scottish isle of Islay and enjoys a huge fan base across the globe, who love the distillery's signature light, fruity, and peated character. In August the distillery released the Cairdeas 2018, an annual range released by distillery manager John Campbell in honour of the Friends of Laphroaig loyalty group, which now amount to more than 700,000 members in over 150 countries. Campbell has been with the distillery since 1994 and has been instrumental in its success.
After the Laphroaig 27-year-old release last year, which brought forth salted caramel, sweetness, peat and immense balance, I think I speak for all fans when I say we are more than excited for this.
From Forbes.com
Posted by Paul Hayden at 10:06 AM