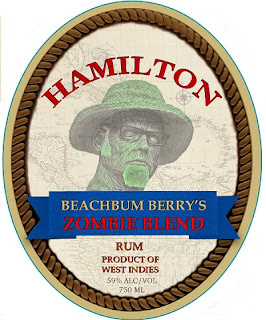 Over the next two years we experimented with umpteen rum mixes trying to create a one-bottle blend that could reanimate your Zombie, fuel your Jet Pilot, and punch up your favorite Tiki Classics without having to inventory three different rums.

This blend had to be more than a high-octane slug of rum, but rather bring balance to the final drink through a subtle marriage of multiple distillates. The end result of our collaboration: Hamilton Beachbum Berry’s Zombie Blend Rum.

Purists may point out that the original 1934 Zombie recipe of 1 1/2 oz Puerto Rican rum, 1 1/2 oz Jamaican rum and 1 oz of Demerara 151 adds up to twice the amount of rum as our Zombie recipe below, which calls for a mere 2 oz of our 118-proof rum — and they’d be right! So what’s missing? Basically, more water in the rum bottle. The less water, the more concentrated the rum, and the more intense the rum flavors.

With the high ABV of the Beachbum Zombie Blend, you get that flavor at half the volume. And at a fraction of the time, trouble and cost of mixing a Zombie with three different bottles.

But while crafted specifically for Zombies, this blend is no one-trick pony. As suggested below, you can deploy it in a variety of classics. Not to mention your own original concoctions!