The name has been drawn!
Thank you !
Adam K. at shops at our New Ballas location is the winner!  Apparently a big Steelers fan! 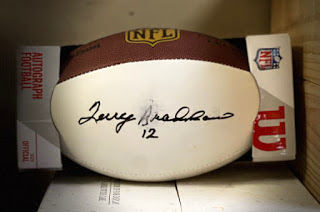 We got a recently signed autographed football from Terry Bradshaw!
As you can see it is a little smudged around the "B".   Picture of the actual ball we have.
We are going to raffle off the ball before Superbowl.
For every bottle of Terry Bradshaw's bourbon you purchase you get an entry intro the raffle.
You must be a member of our Whiskey Reward Club to participate.  It is free to join.
Previous purchases of Bradshaw bourbon will count!
If you already bought a bottle of Bradshaw Bourbon and were a member at the time, we will count those purchases.  I just checked and so far we have 62 entries into the raffle.
Deadline to purchase will be February 5th at 7pm.  We will draw one name Saturday morning Feb 6th and contact you via email for your free autographed football.  You must be able to pick up the football at one of our locations.  It is at Forsyth now, so we will need a few days to get it transferred.  Must be 21 years of age to participate. 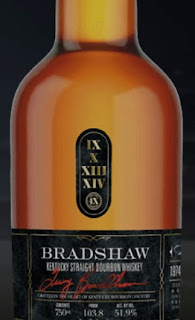 From 4 time Super Bowl Champion - Terry Bradshaw!
Bradshaw Kentucky Bourbon...$37.99
51.9% ABV
70% corn, 21% rye, and 9% malted barley, and is proofed to 51.9% ABV, a nod to the quarterback’s career completion percentage.
Four Super Bowl victories was no ordinary feat, but then Terry Bradshaw was no ordinary player. So, it makes sense that Terry Bradshaw Kentucky Straight Bourbon Whiskey is anything but ordinary. Blended from the finest grains and aged in hand selected barrels, the 212 blend is worthy of a nod from a true champion.
The Final Score Is In…
The experts at Wine Enthusiast have released their final ruling awarding Terry’s signature bourbon a 91 rating!
For both Terry and the Bradshaw Bourbon Team, this is an honor like no other.

We celebrate this accomplishment and are very excited about the future of Bradshaw Bourbon!
Fred Minnick -blind tasting!


Fred Minnick is a Wall Street Journal best-selling American author who has written seven books. He is noted for having a great whiskey palate, as he's a judge on the San Francisco World Spirits Competition, World Whiskies Awards and is the former lead American whiskey reviewer for Whiskey Advocate