What is so special about Schlenkerla Smokebeer?Schlenkerla is a brewery AND a malting operation.This was the standard configuration in brewing craft until the industrial revolution some 200 years ago. Today only very few breweries malt themselves anymore.The malting technique at Schlenkerla is historic.Our smoke malt is kilned directly over an open wood fire. The hot air from the fire dries the malt and smokes it at the same time. Until the invention of modern malting systems in the 18th century with heat exchangers running on coal, oil or gas, our method was THE standard. As the new industrial form of malting was much more cost efficient, the smoke kilns everywhere were closed down. Not so at Schlenkerla and hence our smoke malting has centuries of continuous history.
Schlenkerla Rauchbier is one of the last traditionally made smoked beers, whereas the smokey beers of modern craft breweries are usually made with industrially produced and then afterwards smoke flavored malts. As of 2017 there are only two breweries left in the world (both in Bamberg) that malt & brew Rauchbier the traditional way, hence Slow Food® has made Schlenkerla Rauchbier a passenger in its “Ark of Taste”.Schlenkerla, the historic smoked beer brewery.Not only the malting is ancient, but all relevant other elements of the production are as well. We brew in copper kettles using the old form of “decoction mashing”. Fermenting and lagering are still two separate steps in our brewing process. Lagering and maturation happen in hand caved rock cellars from 14th century below the brewery. Gravity pouring in our brewery tavern is done from traditional wooden barrels.Schlenkerla Rauchbier is regarded as THE classic example of the smoked beer category.Schlenkerla is run in the 6th family generation and was first documented back in 1405.In sum: Schlenkerla Rauchbier is a sip of beer history. Drinking a Schlenkerla is like a small time travel. We are a living fossil from a brewing world that existed centuries ago. 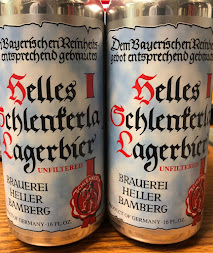 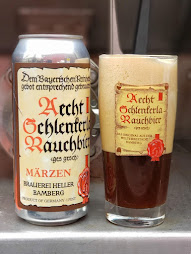 Aecht Schlenkerla Rauchbier Marzen...$15.99 / 4pk 16oz cans
Aecht Schlenkerla Rauchbier Maerzen is unpasteurized and made entirely from smoked malt. Heller Trum is one of the very few breweries left in Germany that does its own malting. During germination of barley, the smoke of beech wood fire is "forced" through the germinating barley for a total of between 24 and 36 hours at varying temperatures; therefore, Aecht Schlenkerla Rauchbier gains an unusual smoky dryness from this process. In contrast, the standard drying procedure for malt is to be heated in a kiln. The brew is mashed by double decoction, hopped once, bottom fermented, and matured seven weeks.