Impressive wines from some of the top winemakers in California

Ashes & Diamonds, opened this fall, is the brainchild of Kashy Khaledi, son of Darioush Khaledi (owner of Darioush Winery, also in Napa Valley, since 1997)....Khaledi, 41, came across the film Ashes and Diamonds years ago, when he was hitting a creative wall at Capitol Records. “As one tends to do in those situations, you take yourself out of the work and noodle into corners of inspiration,” he tells Vogue. “Then I watched the movie and was emotionally pulverized.” Shortly after seeing the 1958 Polish war film, Khaledi gave his notice at Capitol and went to work developing Ashes & Diamonds Winery.
Khaledi coordinated the winery and its impressive cast in the same way a hit album might come together. He enlisted some of Northern California’s most high-profile winemakers, Steve Matthiasson (of Matthiasson Wines, winner of Winemaker of The Year from the San Francisco Chronicle) and Dan Petroski (of Massican and Larkmead), to craft the wines. (Petroski made some of the first vintages and has since left the project, but the talented Diana Snowden Seysses, also the winemaker at Snowden Vineyards, has now filled his shoes.) In addition to growing fruit on his own estate in the Oak Knoll district, Khaledi is also working with some of the top winegrowers, like Bart and Daphne Araujo, for his wines. Brian Roettinger, who most famously designed the album cover for Jay-Z’s Magna Carta Holy Grail, designed the labels. To helm the food program at the winery, Khaledi hired chef Emma Sears, formerly at Scribe.  - Vogue
In stock at Rock Hill now.  Order online for pick up at other locations 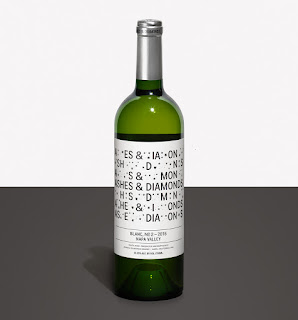 The 2016 Blanc No. 2 is bright, chiseled and finely cut, with terrific energy and tons of personality driving citrus, mineral and floral notes. There is plenty to like in this energetic, taut white from Ashes & Diamonds.
Rated 92/100 Vinous Media

2016 Ashes & Diamonds Cabernet Sauvignon Red Hen Vineyard No 1...$84.99
Winemaker: Diana Snowden (Araujo, Ramey,Leflaive, Dujac, Snowden)
Red Hen Vineyard is another of Bart and Daphne Araujo’s biodynamically farmed sites. The property sits in the Oak Knoll District of Napa Valley, located in the foothills of the Mayacamas Mountains, across Highway 29 from A&D Vineyard. With well-draining gravel and cobblestones suspended in alluvial silt and clay, the soil here acts like a sponge, naturally pulling rainwater down from the mountains and requiring little to no irrigation. It also encourages fine tannins and finesse in the resulting wines. Red Hen’s Cabernets have a quiet power, poise and impressive length with silky, weightless tannins that are the hallmark of this benchland site.)
The 2016 Cabernet Sauvignon Mountain Peak Vineyard No. 1, from a site on Atlas Peak, is one of the most complete wines in this range. Layered, aromatically expressive and vibrant, the 2016 is very nicely balanced. Understated, as all these wines are, but with good depth and plenty of nuance, the 2016 offers real character and tons of personality.
Rated 92/100 Vinous Media