IPA from The Bruery!

From The Bruery
“IPA” and “cans”. Two words you’re not likely to associate with The Bruery & Bruery Terreux.
But today we’re introducing a third member to Famille Rue, and those words are exactly what Offshoot™ Beer Co. will be all about. Hoppy beers, in cans, brewed by our talented team here in Orange County, CA.

We’ve admittedly danced around our promise to never brew an IPA. How about a hoppy IPL? A Cascadian dark ale? A hazy Vermont-style hoppy pale? We’ve brewed them all, and many, many other hoppy releases that have appeared on draft, and occasionally even in our eye-catching bottles. As we happily cross the threshold into our tenth year in brewing, our ban on IPAs has been justified to a point, but this promise is also beginning to serve as a quaint reminder of our stubbornness, rather than a commitment to innovation.

So here’s a promise we didn’t exactly make – we never said we wouldn’t launch a new brand that focuses on fresh, juicy, aromatic, and conveniently canned IPAs. So it’s about time we release the unexpected beer you’ve been waiting for. You’ve shown you want IPAs from us (and we know we want IPAs from us) and we believe doing so will give our Famille the opportunity to be innovative in ways we haven’t been able to experience before. 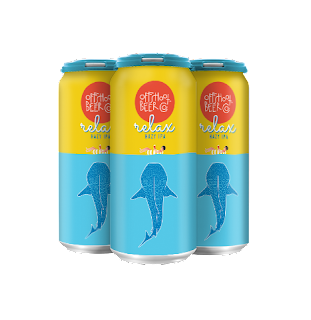 Relax [it’s just a hazy IPA] embraces the new way to enjoy IPA - unfiltered, fresh and full of hop flavor and aromatics... without the bitterness to stand in the way of kicking back with a juicy beer. It features a combination of Citra, Centennial, Simcoe and Amarillo hops, imparting fruity, tropical and citrusy notes to complement the round, soft mouthfeel of a hazy IPA.
Posted by Paul Hayden at 11:14 AM